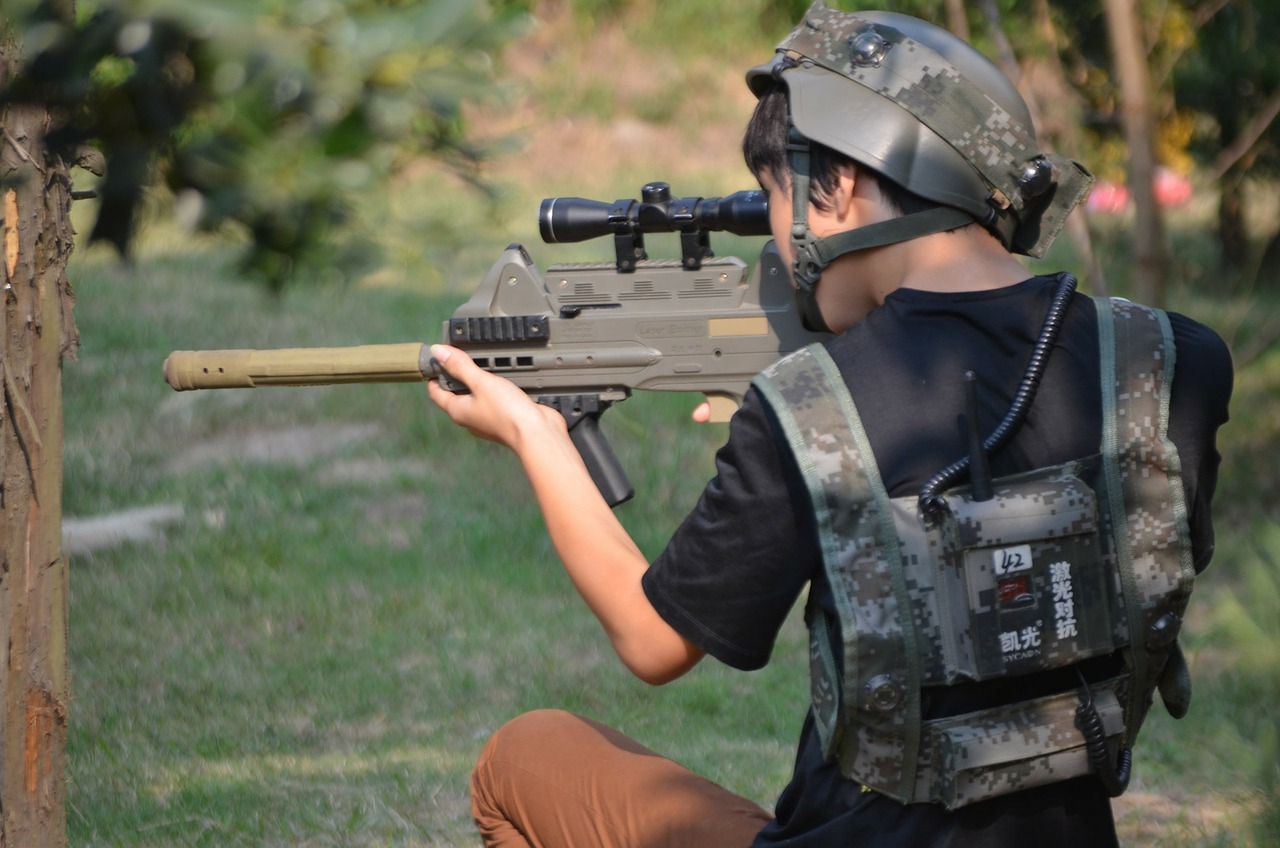 Are you looking for a new hobby to keep you from boredom? If so you may want to consider the hobby of airsoft guns and playing airsoft games. The airsoft craze has been spreading around the world because it is a fun and energizing hobby. Airsoft games are played with airguns that shoot plastic BBs and are highly detailed replicas of authentic, popular firearms. When it comes to airsoft games you do not always have to play existing games, you and friends can play a game with your own set of rules.

The popularity of the airsoft hobby grows annually since it originated in the early 1980’s in Japan. It got started as a variation to the paintball craze. Over the years, it has advanced in both technology and sport. The airsoft guns these days have much better performance and a more realistic feel than they ever have before, and they keep advancing. Simulated war games are a big part of the airsoft hobby, but they are also commonly used for training purposes as well.

Here is a list of 18 airsoft games that are very popular among users:

This is one of the most exciting airsoft games these days, and no matter what type of airsoft gun or airsoft gear that you have, it will work. The format is simple – there is one president when the game begins. At the beginning half of players in the game are going to be the president’s bodyguards, and the remaining players are the assassins. To win the game, the president is supposed to reach the specified safe location without being hurt, so the bodyguards need to be on alert and protect the president at all cost. For the assassins to win they need to kill the president successfully before he gets to the safe zone. This airsoft game requires a great amount of strategy to win, but the rules are simple.

Zombie is an airsoft game which can be played with small or large groups of airsoft fans. To play you need to divide the team into 4:1 ratio of human to zombies. The player who is being the zombie needs to infect the humans without getting shot more than 3 times. When a human gets attacked by the zombie they also become a zombie, decreasing the number of humans in the game.

The humans need to find all the cure items prior to getting infected so they do not become a zombie. If all the zombies are killed then the humans win, but if the zombies infect all the players first they win the game. This game can be played with electric airsoft pistols, or with rifles, which needs to be determined before the game begins. Many people that play this game like to limit it to airsoft pistols to make it more challenging.

This small game is like a military simulation, which makes it a popular game for training purposes or just for fun. A team of 4 is named as the Special Forces, and a group of 8 people as the Bad Guy Team. In this game, you can take advantage of your airsoft rifles, airsoft shotguns, or airsoft pistols for side arms. To make it even more exciting then airsoft grenades can also be incorporated. As with any game it is important to always wear protective airsoft gear to avoid a real injury. To win the game you just need to kill off the opposing team, and since the bad guys will always have twice as many people as the special forces, they begin with an advantage, making a good strategy key for the special forces.

Medic is an airsoft game that requires 2 teams of an equal number of players. On each team, there needs to be one medic for every 10-15 people on each team. The medic can heal a teammate that has been shot allowing them to stay in the game. The hard part is for the medic not to get killed, so he will need some backup. To win one team needs to wipe out the other team.

Sniper is an airsoft game that is like hide and seek. One player for every 10-people playing is the sniper who uses an airsoft sniper rifle. When the game starts, the sniper has two minutes to hide before the opposing team can begin looking for him. The sniper should find good hiding spot where he can try to pick off the opposing team one by one without being found. The sniper can move around to different hiding spots. When a sniper is shot, he must be escorted back to a safe checkpoint, he can run at any time before reaching the safe checkpoint, or once he is there. If the sniper is shot again, he loses. The sniper can win by eliminating the opposing team before he is eliminated.

Capture the Flag is another tactical game that is very popular, and very simple to play. You need to split the players up into 2 teams with each team having a home base. The home base for each team is where that team's flag should be placed. There needs to be two different colored flags to differentiate the teams. In order to win you need to get the opposing team's flag back to your base before without being shot.

In this airsoft gun game the players are divided into four teams, ie. Red, Blue, Green, and Yellow. There are six different positions that need to be captured by changing a flag to the color of your team flags. The main idea is to detain all the six positions in a set amount of time, most people do 30 minutes to 1 hour. If a player is shot, they must go back to a position that is under their team's control and must wait 5 minutes before re-entering the game. The game ends when all posts are captured or when the time is up. If the time expires then the team with the most positions claimed wins.

CQB is like a regular airsoft battle between two teams, it is just played in close quarters as the name indicates. Many people choose to play this game with only airsoft pistols because of the close quarters, but that is up to the players in the game. To win you need to eliminate the other team.

In save one bullet a group of players need to barricade themselves in a defensive position, such as a bunker or fort. Each player in the defensive barricaded position are allowed one clip or magazine. The team they are trying to defend against can have as much ammo as they want. To win the team in the defensive position needs to eliminate the other team before being shot or running out of their limited ammo supply.

This is a simple, and short airsoft game. Players divide into 2 even teams and everyone is armed with an airsoft pistol. One team needs to eliminate the whole other team to win.

Fort Wars is a variation of Capture the Flag. In the game, there are two teams that each have their own fort with a flag in it. To win, one team needs to replace the opponent’s flag with their team’s flag. Three players can protect the fort while the rest of the team tries to place their flag in the opponent’s fort.

Turf is another Capture the Flag variation, but this time both teams’ flags are strategically placed around the battlefield. There will also be 4 different posts, or forts in the game. The objective is to secure as many posts as possible within the specified time span (usually 30 minutes). If a player is shot by airsoft rifle or any other gun they must sit out the remainder of the game. The team possessing the most posts at the end of the time limit wins the game.

Hostage rescue requires two teams, one team is the guards, and the other team is the hostages and the rescuers. The hostages are placed in various locations throughout the battlefield area with guards close by. The rescue team needs to try and release the hostages without being shot. Once they rescue hostages they need to get them back to a specified fort, or safe place. The guards win if they can eliminate the other team with airsoft rifles before they rescue the hostages. If the rescuers can free all the hostages and get them to the safe place they win. The airsoft rescuers should have airsoft rifles but also need to carry airsoft pistols to give to a hostage when they rescue them.

In Prison Break, there are two teams, one being guards and the other prisoners. The prisoners are only allowed to have airsoft pistols, but the guards can use airsoft rifles and any other type of airsoft guns that they want. The prisoners need to escape and get back to a chosen safe space to win. The guards need to stop the prisoners from getting back to their safe space.

Officers is another simple airsoft game which has two teams. One team is officers, and the other team are attackers. The officers need to follow a specified path, and to win they need to make it to the end of that specified path without being shot. Only one officer needs to survive to win. The attackers have airsoft assault rifles or air sniper rifles and they can hide or move around as they wish. They need to keep the officers from making it to the safe space.

Ambush is like Officers, except one team is considered infantry and they need to follow a specified path to a safe space. The other team should be a quarter of the size of the infantry, and they can only use airsoft sniper rifles. The small group of snipers must eliminate the infantry troops before they make it to the safe space at the end of the chosen path. The infantry team needs to stay on the chosen path, but snipers can move around as they wish. Snipers win if they keep infantry from reaching their safe space.