You’re not the first to ask this question, but it remains an excellent one many other airsoft beginners wonder about. Today, airsoft gun technologies have become incredibly advanced, with even lower-priced guns bringing surprises to the table. Still, the premium weapons are also getting even better.

The answer to this question isn’t clear-cut, as you’ll be delving into some nuances. Nevertheless, we believe that the answer is you’re not guaranteed to lose just because your AEG isn’t $400. Read on for the finer details. 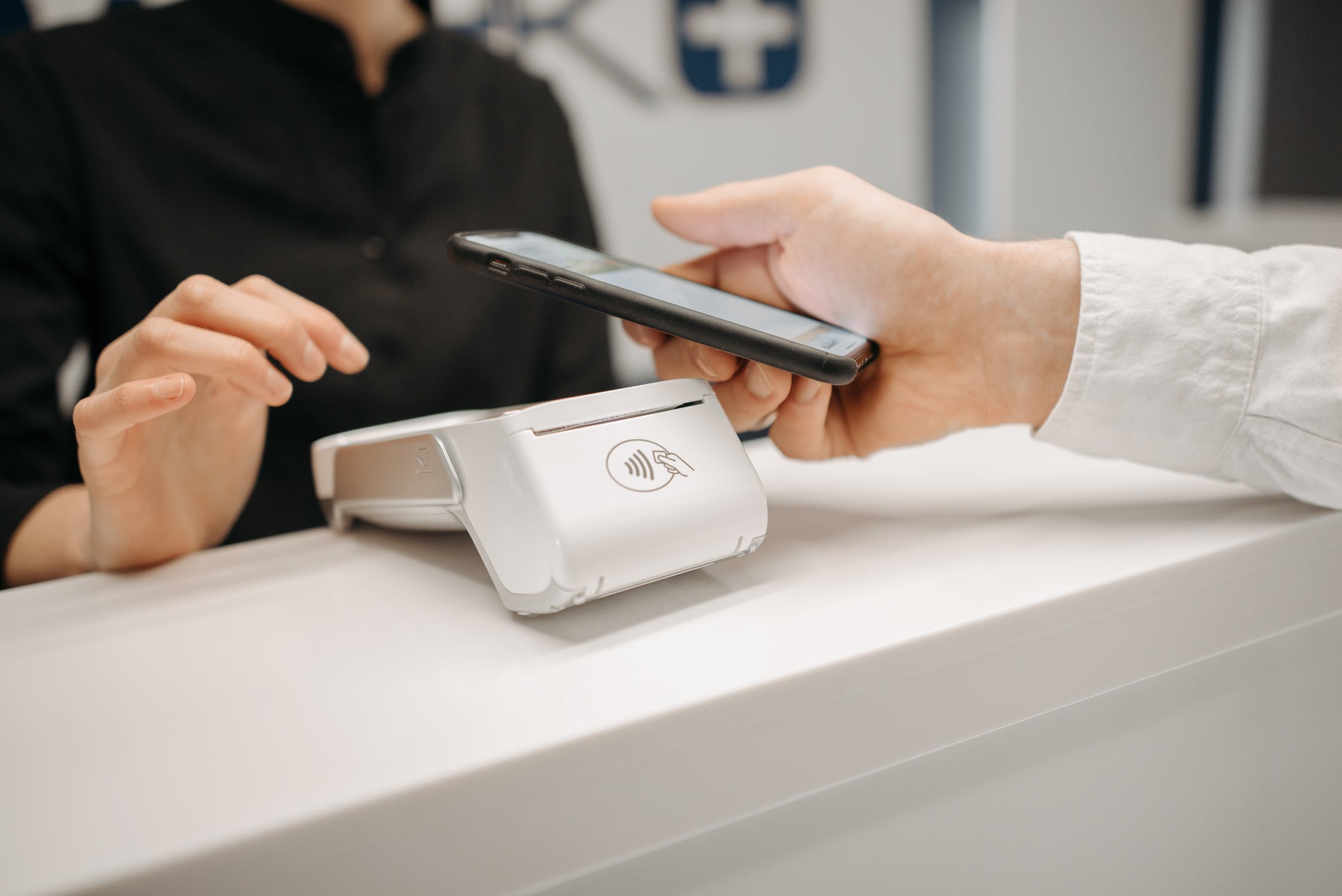 Your airsoft gun’s price does matter in the end, but probably not in the way you think. The more expensive your weapon, the higher the realism factor. This doesn’t apply to all products out there, but you’ll find that this tends to be true.

You’ll find some airsoft gun reviews from all price points in the sections below. From Lancer Tactical to ASG, there’s a rifle for beginners and seasoned experts.

This Lancer Tactical LT-02 falls into the starter rifle category, but that’s no reason to dismiss it. It comes with the company’s ProLine internal components but in a nylon polymer receiver. The quad RIS handguard is made entirely of aluminum, hence the label “Hybrid.”

Other parts like the stock, buffer tube and pistol grip are made of nylon polymer.

Visually, this is a relatively standard M4 carbine, though the LT-02 doesn’t have the carrying handle and rear sight combo. Instead, you have a flip-up rear sight for aiming. The top rails aren’t seamlessly-linked, but this is only a matter of personal preference.

The handguard comes with a vertical foregrip attached to the bottom rail, and the side rails have removable covers. These accessories keep the rails clean and also increase grip comfort. All rails will accept standard Picatinny attachments.

The crane stock is adjustable and also contains the spring. You can swap springs for different muzzle velocities thanks to the built-in system.

Unlike a traditional M4, the LT-02 comes with an electronic flat trigger linked to an ETU and MOSFET. Flat triggers are more responsive, and the MOSFET can be programmed for firing in bursts. A traditional trigger sometimes suffers from low response, reducing your performance in the field.

Lancer Tactical has designed this LT-02 AEG with a 6.03mm metal barrel. Narrow barrels like this used to be less common in low-price airsoft guns, but many companies are now providing one due to popular demand and superior performance. These barrels increase accuracy and muzzle velocity by a substantial amount.

Even though the Lancer Tactical LT-02 Hybrid Gen 2 MK 18 Mod 0 CQB AEG isn’t a premium gun, it comes with features usually found on high-end products. This rifle is also upgradeable, so you can spend more on aftermarket parts later. 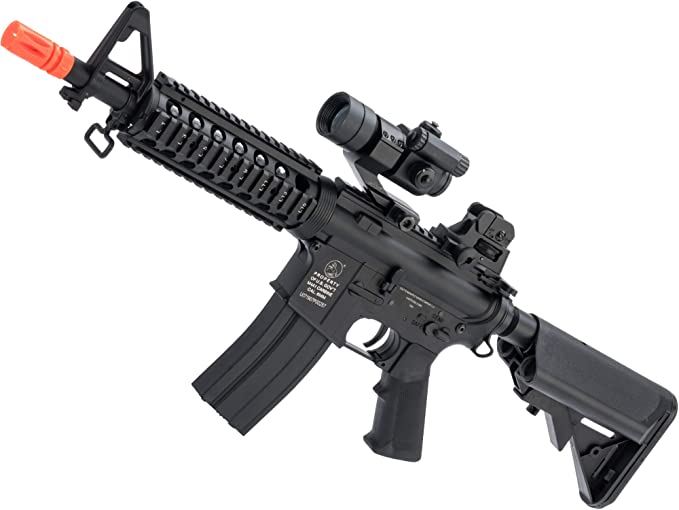 If you have a little more cash on hand to spend, this M4 copy from Cybergun is an interesting option. It’s fully licensed by Colt, which produced most of the U.S. Armed Forces’ M4 carbines for most of the last few decades. Therefore, you can expect this weapon to be extra realistic and accurate to the original.

Unlike the Lancer Tactical rifle above, this one has a full metal upper and lower receiver, allowing it to withstand extra trauma from the battlefield. The handguard is also made of metal, as is standard for higher-quality weapons.

The markings on this licensed rifle are similar to that on an actual M4 carbine used by American soldiers. “Property Of U.S. Gov’t M4A1 Carbine Cal 6mm” is on the magwell, which only differs from the original in caliber. It makes for an excellent MilSim airsoft gun.

This M4 ditches the carrying handle for a detachable rear sight and a red dot sight. The former attachment is basically a carrying handle’s rear sight block only, so those familiar with the M4 carbine can still use a similar aiming platform.

Mounting other accessories is possible since the quad RIS handguard is compatible with many Picatinny accessories. Foregrips, lasers, and PEQ boxes are all fair game on this rifle, and you can make your gun look like a Special Forces gun. The top Picatinny rail on the receiver isn’t seamlessly linked to the handguard.

Cybergun understands the experienced airsoft player’s desire to upgrade their weapons, so the M4’s Version 2 gearbox was designed to be fully upgradeable. You can increase the firing rate and do much more with a customized gun, attaining your perfect rifle.

A telescopic crane stock is attached to the rear of the M4, making it adjustable for different arm lengths. The rear sling point is also on this stock.

In terms of realism, it isn’t easy to surpass this model. It’s based on Colt-provided schematics, meaning it’s among the closest to the real thing. 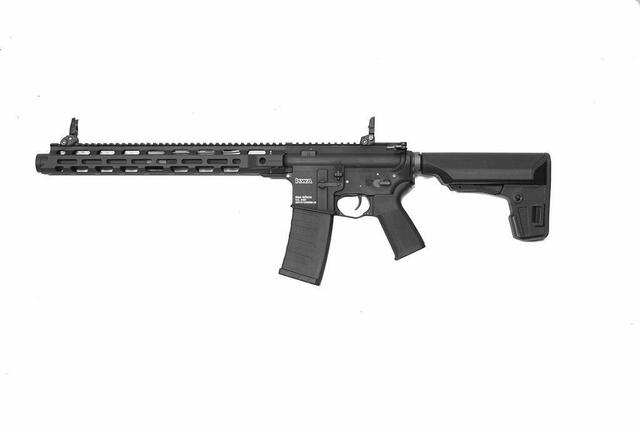 With a full metal receiver, this rifle can withstand all manner of damage. The upper receiver can even be swapped out with other KWA ones. You can create your own gun that suits your tactical needs.

Instead of a quad Picatinny RIS, the RM4 Ronin RECON has an M-LOK handguard, with only the top rail being Picatinny. M-LOK slots are more versatile and allow for unique arrangements not possible with older rail systems. This handguard is also entirely metal.

When firing, the rifle will cut off the stream of automatic gunfire at either 30 or 120 rounds, depending on your settings. This is to prevent wasting ammunition.

KWA included an upgraded high-torque motor for optimum performance, resulting in a firing rate of 19 rounds per second. When coupled with the adjustable rotary hop-up, the rifle will hit targets even from far away. A high-speed gear set is also installed within the gun, allowing it to reach these impressive firing rates.

The RM4 Ronin RECON’s exterior appearance is almost identical to an actual firearm, but there’s another rare feature that boosts its realism factor. The Kinetic Feedback System simulates authentic recoil. When you fire, it’s almost as if you’re shooting a real M4. 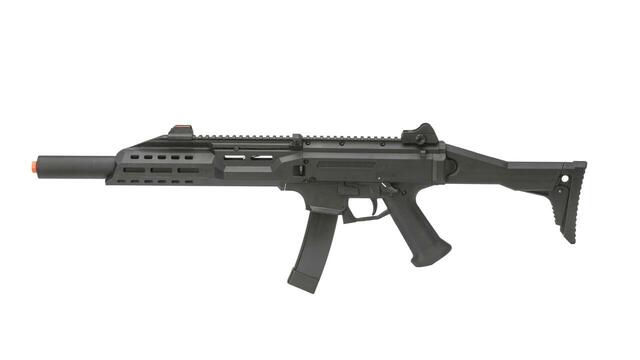 Made by ASG and licensed by CZ, this Scorpion EVO 3 A1 B.E.T. is the suppressed version of the standard-issue EVO 3 A1 used by many police forces worldwide. When the airsoft version of the unsuppressed gun was released, its incredibly realistic mechanisms took the world by storm.

The EVO 3 A1 B.E.T. is similar to its older cousin, but it has also received several upgrades to its internal components.

The gun is made of metal and weighs almost the same as its firearm counterpart. The polymer parts are still rigid and feel like material for weapons use.

There’s a top Picatinny rail with detachable iron sights, but the other rails are M-LOK slots. Therefore, you have unique mounting options available. Laser sights and many other accessories are all compatible with this submachine gun.

Internally, this weapon is a technological marvel. There’s a new ECU board, gearbox, and an ULTIMATE basic motor. These parts are also linked to the electronic trigger, a sensitive piece of equipment that ensures all semi-auto shots are registered.

The charging handle will lock back to show an empty chamber upon firing the last round in the magazine. This feature is on many firearms but not always on airsoft rifles.

It Depends on Performance

All of these guns are fully capable of helping you win during airsoft war games. The battlefield is a chaotic place that doesn’t guarantee the best-equipped warrior survives a gunfight. If they make a poor decision, enemies can still take them out.

The four models are all customizable and will fire BBs accurately at a distance. The ASG and KWA AEGs have more features, but they don’t necessarily increase accuracy. They shoot BBs faster, but that doesn’t mean you’ll never miss.

Performance is more important, and paying extra doesn’t necessarily mean getting an inherently better gun. It may be more realistic, but some of these features are meant more for military training than games. You won’t lose any less with a cheaper gun than if you’re fielding a $400 weapon.