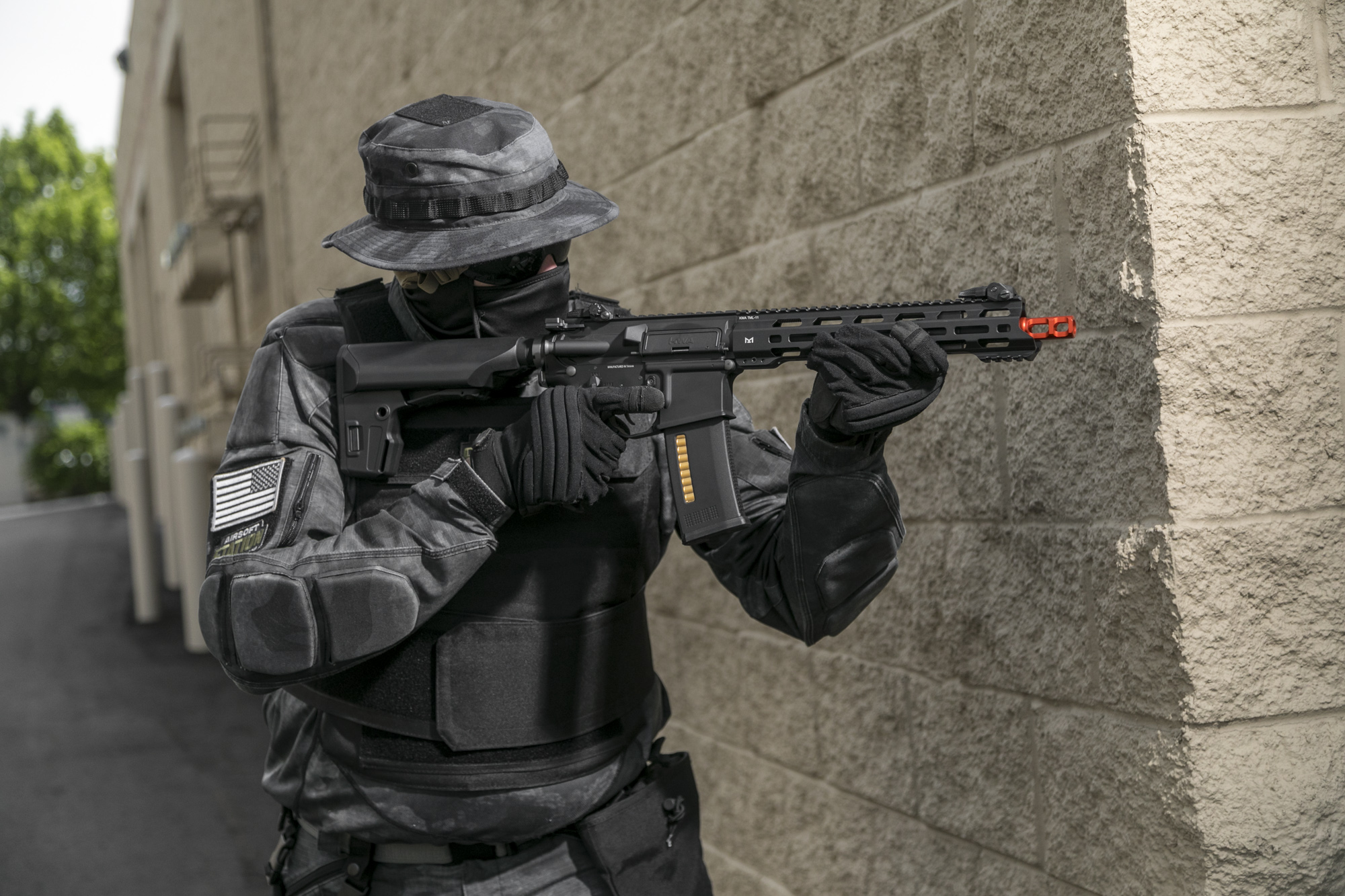 Airsoft guns were designed to mimic real-life firearm designs. Manufacturers frequently seek unique designs to emulate, from the common Glock pistols to the rarer Barrett .50 caliber sniper rifles. Sometimes, these airsoft copies are actually made by the companies that designed the original guns.

Training airsoft guns may be good for the arena, but not everyone is interested in getting peppered by BBs from all sides. Some of these users want a replica gun that resembles a weapon they already own. Thus, they can practice using these non-lethal toys and keep their real firearms locked in a gun safe.

These airsoft guns are perfect copies of their real-world counterparts, aside from the orange tips that the U.S. federal government requires. Many features are preserved and replicated faithfully for an authentic experience from tip to buttstock.

Read on to find out more about these realistic airsoft training guns. Whether you practice for safety or war games, they’ll complete your loadout.

The Elite Force Glock 17 was one of the first few fully-licensed airsoft pistols, as the parent company Umarex managed to secure the rights from Glock itself. Today, the guns are still being replicated, but the Gen 4 Glock 17 remains ever-popular in both airsoft and armed forces circles.

The gun’s frame resembles the original with its rigid injected molded polymer, although the slide is lighter as Elite Force used aluminum in its construction instead. You’ll also be glad to know that the barrel is made of metal.

Aside from the orange tip, everything is visually accurate. You’ll notice the proper Glock 17 markings on the gun and the original 9x19 caliber designation.

All Glocks have a trigger safety that prevents accidental discharge, so you need to grip the weapon properly. This replica also has a functional slide release that works exactly like its original counterpart.

For ambidextrous use, this Elite Force Glock 17 Gen 4 pistol has a reversible magazine release. You’ll need to open the weapon up before swapping the button, but it’s not too challenging. The magazine release itself is large and easy to depress.

Like many modern pistols meant for combat, this one has a standard Picatinny rail below the muzzle. It accepts flashlights, laser sights, and more.

Years of experience led to the adoption of an ergonomic pistol grip. It has fine anti-slip texturing along the sides, front, and backstrap.

The iron sights are also modeled after the ones on modern Glock handguns. The three-dot design makes target acquisition instant, allowing for quick shots in close quarters.

Knights Armament Company is a firearms manufacturer founded by C. Reed Knight Jr., and it has even received awards from the U.S. government. This PDW M2 GBB airsoft rifle is the culmination of decades of experience working with U.S. specs for firearms. Other than the orange tip, everything is incredibly realistic.

You’ll surely notice the authentic Knights Armament trademarks laser-engraved onto the receiver. That shows you the copy has the approval of a firearms manufacturing giant.

The design is that of a modernized and modified AR-15 rifle, the basis of the military M4s seen around the world. In particular, this one mimics KAC’s PDW.

For accessories, you won’t go wrong with the Keymod handguard. Anything below the seamless top Picatinny rail is made to accept Keymod rails, a unique mounting system that introduces new options. Unlike your standard quad RIS, this one has diagonal angles for new mounting styles.

Attaching diagonal sights becomes possible, as with angled lasers. The choices are endless, waiting for you to exercise creativity.

The fire controls and magazine release are entirely ambidextrous by default, so it doesn’t matter which hand is your dominant one. As with the traditional AR-15, this PDW has a charging handle that both hands can use without much effort.

This airsoft PDW can replicate authentic recoil brilliantly thanks to an open-bolt gas blowback system.

John Wick’s weapons in his namesake movie series have sparked discussion in the firearms community, as they’re functioning firearms geared towards competition. Despite some complaints, it hasn’t stopped JAG Precision from making an airsoft version of Wick’s gun in John Wick 3: Parabellum.

Taran Tactical might be known as a race gun brand, but it certainly knows how to make a combat-ready pistol that also works in competitions. This handgun functions just like a 2011, the 1911’s modernized form. The safety catch, grip safety, and magazine release are all ambidextrous.

JAG Precision uses solid aluminum for the slide and frame. The former has some lightening cuts for reduced muzzle flip and travel time, making it a joy to shoot.

The flared magwell is common in competition guns, though some tactical handguns have also adopted the feature. This 2011 Combat Master has one to make reloading blind much easier. It guides the magazine into the pistol grip cleanly.

Many other features on this pistol also contribute to a pleasurable shooting experience, such as the match-grade trigger, barrel, and stainless steel guide rod. Aiming is easy with the target-style sights, and the front sight has a fiber-optic insert for increased visibility.

Shooters who own 2011 pistols or even the actual Taran Tactical 2011 Combat Master will find this replica a work of art.

KWA is another airsoft gun manufacturer that makes realistic copies of licensed weapons. In this case, the company managed to obtain full licensing for Heckler & Koch’s HK45 pistol. It’s an improved version of the USP45, used in the late 90s.

Like the USP45, the KWA copy faithfully emulates the polymer frame and metal slide. The slide has serrations for easy cocking and manual cycling, and you can rely on the polymer frame to withstand all types of battlefield stresses.

The threaded barrel is orange and accepts mock suppressors. However, make sure to consult your local airsoft laws first.

Otherwise, the weapon is a direct copy of the popular HK45 in every visual aspect, and the elements act the same. You get an ambidextrous slide release and magazine release flap. The safety catch also doubles as a decocker but isn’t ambidextrous.

Additionally, the gun has interchangeable backstraps, which help accommodate all hand sizes.

This HK45 GBB comes with KWA’s NS2 gas system for extra realism as an added perk. It helps the gun perform much better than typical systems, all the better for training.

Mounting flashlights and lasers to the bottom rail take only seconds. This example can even accept real-life firearm accessories, which enhances practice sessions.

Since KWA is yet another Umarex brand, it’s not unusual to see a second or third product of theirs on our list. This KWA GBB AKG-74M is a perfect copy of the AK-74M, the previous Russian service rifle. While the AK-12 now replaces it, many American gun owners own AK platforms.

This airsoft copy is a gas blowback weapon with a 40-round magazine. However, that’s not an unrealistic magazine capacity, as you can get the same number on extended AK magazines.

KWA uses high-quality materials for every component of the rifle. The metal receiver functions precisely like the original AK gun, down to the safety and fire selector. It also has the proper spot-welds for a realistic appearance.

The sights are made in the style of the original AK-74’s iron sights, so you can expect to hit any targets accurately.

Since this gun is a 1:1 replica, many replacement handguards and dust covers should be compatible, especially for customization purposes.

You even get a blank-fire mode, which helps users train without chambering BBs. 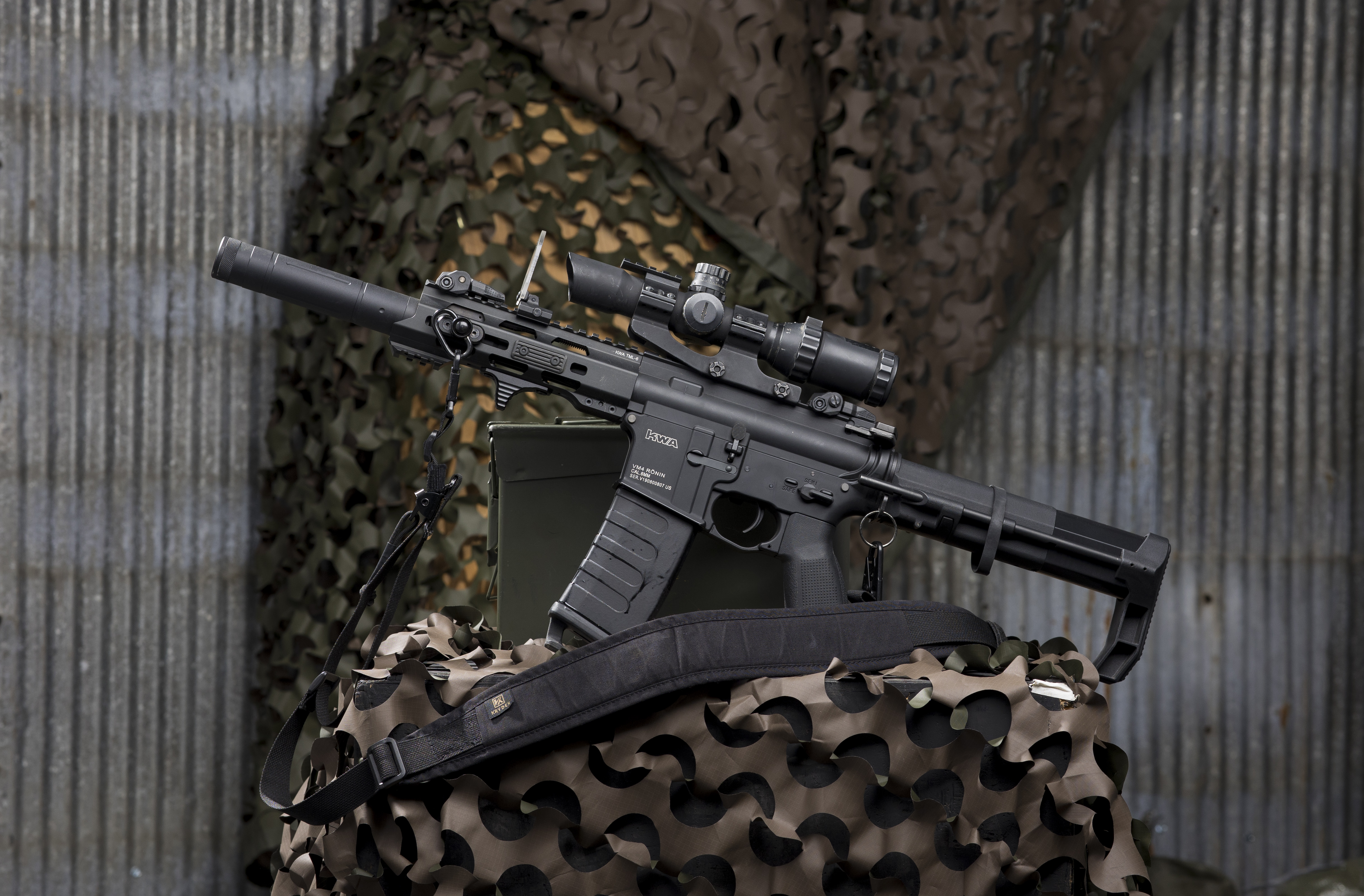 Most military, police, and civilian gun owners would love to have affordable practice options, as airsoft is a proven tool for increasing weapon proficiency. These weapons are all remarkably effective for training muscle memory, handling, and more. While there are always differences, you can easily attain the proper experience with a replica.

For years, airsoft weapons have been used to train police officers and military personnel. Many expert instructors also praise the role of airsoft in their training, especially with dry fire drills and developing good habits.

What’s more, airsoft replicas cost much less than the firearm itself. BBs are also remarkably inexpensive compared to thousands of cartridges. Thus, you can save money and benefit from the training.

The weapons covered in this article are the results of painstaking efforts to emulate the features of a firearm. While they only shoot BBs, you can still use the same actions to fire, reload, and clear them.

Consider obtaining one for training today with all of these factors in mind. These models range from competition guns to military weapons.