How Do I Fill My Green Gas Airsoft Rifle?

How Do I Fill My Green Gas Airsoft Rifle?

Airsoft rifles are divided into three main categories: gas-powered, AEG rifles, and spring-operated guns. While each has its advantages, some airsoft fans prefer the gas-operated airsoft guns, particularly models using green gas. Even so, there are players who hesitate to get one because refilling the gas can be complicated.

Fortunately, the process only looks intimidating and doesn’t pose an actual problem. With some guidance and practice, anyone can refill the gas supply within minutes. Keep reading for all the details.

What Is Green Gas and How Does It Work? 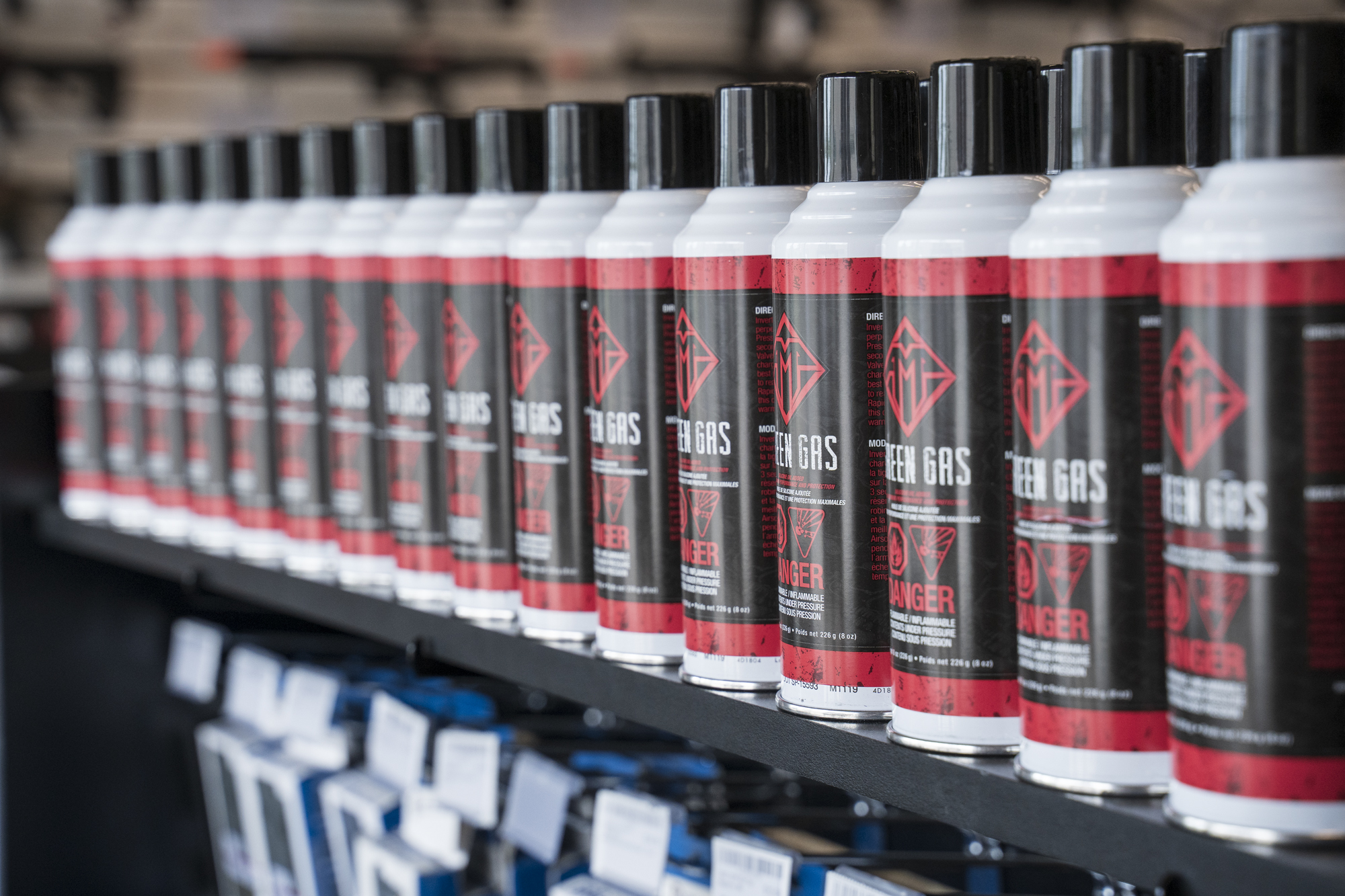 While the phrase might remind some of the greenhouse effect and climate change, that’s not what green gas is. It’s closer to propane in chemical composition instead of carbon dioxide or carbon monoxide. This gas is often mixed with silicone oil, as the guns require some lubricant to function smoothly.

Other substances are present as additives. They help stabilize the gas, so it doesn’t expand too much. Generally, the fewer additives in the canister, the higher your gun’s muzzle velocity becomes.

In a green gas airsoft rifle, the magazine will contain a reservoir for the gas, referred to as the propellant. When you squeeze the trigger, the reservoir’s valve will be forced open, allowing a small quantity of propellant to be released. This gas will push the chambered BB out of the barrel, resulting in a successful discharge.

While some gas will fly out of the barrel along with the BB, a certain amount stays behind to move a pistol slide or rifle charging handle backward. This action will chamber another BB from the magazine, allowing you to fire another round.

This principle is called blowback, as it uses the gasses to push the gun’s mechanism back. It’s an operating system found in many low-powered firearms, like pistols. Airsoft is weak enough for blowback to work safely, prompting many realistic copies to use this mechanism.

Now that you know how these weapons work, you can read on for the process of refilling a green gas airsoft rifle.

Unlike CO2 guns that use a cartridge, you need to fill a green gas weapon’s reservoir using a canister. Here’s how it’s done: 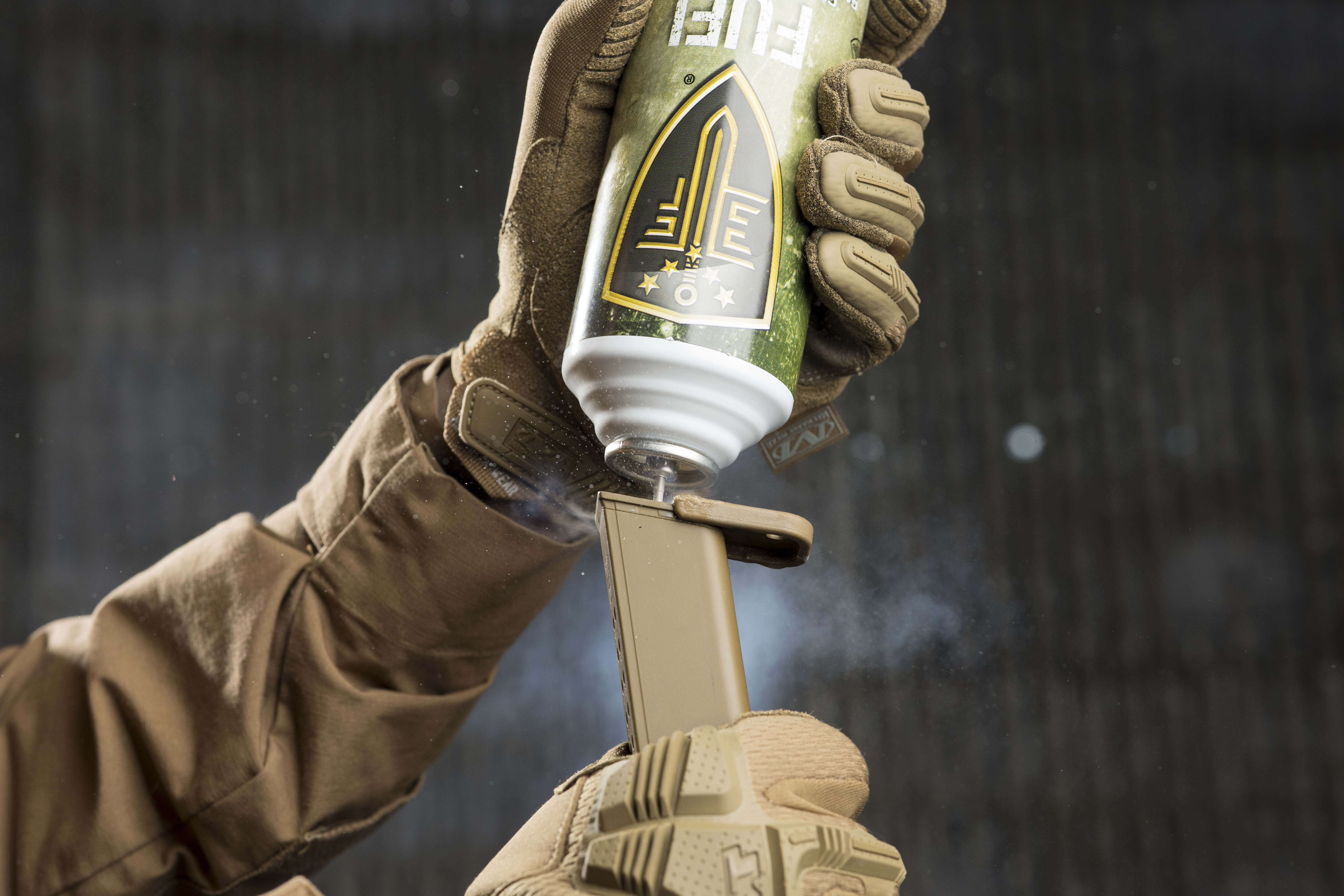 That’s all it takes. When the magazine starts releasing small puffs of green gas, that’s a sign you should stop adding more.

It would be best to take some precautions before refilling a magazine. Try to make the magazine stay at room temperature to ensure the gas stays in optimum condition.

Please don’t press down on the valve to discharge all the gas in the magazine. Your O-rings will freeze and be damaged. Instead, dry-fire all of the gas until there’s nothing left, as this is the safest way to use up any unwanted propellant.

Green gas airsoft guns have several advantages compared to various propellants, but these advantages depend on the situation. Most notably, green gas is usually cheaper than CO2 and other gasses. Therefore, you can fire more magazines for the same amount of money.

Another advantage is that green gas doesn’t usually become too powerful, something all venues have rules against. Guns that are too powerful are banned, but green gas is limited enough in its power to stay within restrictions.

Green gas comes in several varieties as well. Some types are better used in weaker guns, while others are perfect for almost all other conditions. You can even get what’s called “black gas” for the coldest temperatures since it’s so strong that it propels BBs quickly, even in cold environments.

Pure propane is the strongest possible propellant, but it requires extra lubrication for maximum velocity. It’s the type you use for grills and cookers.

With many varieties of green gas, you can pick the one that applies to your needs. Just try to follow any on-site rules when firing.

Unlike CO2 magazines, you can even refill a green gas magazine at any time. This can be useful in the field when there’s a quiet moment to ensure you don’t run out of gas later on.

Generally, many people prefer green gas over CO2, but there are times when the latter propellant is the better pick. Weather conditions and temperature are reasons people often cite to stop using green gas, and they’re entirely valid. It’s proven that green gas liquefies in colder places, so you’ll find yourself lacking firepower.

In the worst-case scenario, your weapon won’t fire at all.

Having too many types of green gas can also confuse beginners. The idea that you’ll need all the various types is a selling point mitigated largely by shops pointing out what owners should use, but there are always occasional mistakes.

In terms of firepower, green gas is the weakest one since the canisters store them at lower pressures. If your gun has a heavy bolt or slide, it may not cycle properly. You can get black or red gas, which is more powerful but less common.

Using high-pressured gas in weaker guns can damage the internal parts. This situation can occur mostly in polymer models, so you may have to get a lower-powered propellant instead.

It’s Not a Hard Process

Refilling a green gas magazine for the first time might seem scary, but you’ll be a pro one day with repeated practice. Green gas can be harmful to the body, so we recommend doing this in a ventilated area that you can vacate quickly if needed. Please also use the correct gas with your specific model.

Many airsoft players like green gas guns for an affordable propellant, and you can even pick the type as the situation requires. However, no matter your location, a standard can should get the job done.