A fundamental characteristic of modern firearms is adaptability, whether in actual combat or an airsoft MilSim. Rails allow users to quickly slot in attachments and accessories to their weapon depending on the changing circumstances on the battlefield. However, not all rail systems are built the same, and each has its advantages and disadvantages over the other.

This article will discuss the differences between rails systems, whether M-LOK, Picatinny, Weaver, or Keymod rails.

What Is the Rail System?

The RIS or Rail Interface System is a term used to describe the system that allows users to quickly attach accessories to a firearm without complex tools. These may include tactical lights, optical sights, forward handgrips, and bayonets. Modern rail systems have been standardized to accommodate different brands, though older rail systems are still used.

In general, most modern rail systems are made to fit older accessories, but older rail systems will need adjustments to fit modern attachments. 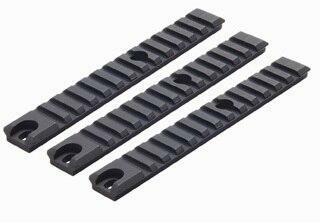 Among the systems in this list, the Weaver rail is the oldest. Developed by William Weaver in the 1930s, his invention brought the rail mounting system within easy reach of the average hunter. The Weaver system was so revolutionary that it wouldn’t be replaced as the U.S. military standard until Picatinny was adopted in 1995. The Weaver rail system can still be found in older firearms, especially ones made before 1995.

Older Weaver rails used a two-piece system, but this required exacting precision during mounting or scopes wouldn’t be aligned properly. Modern Weavers now also come on a single rail system that negates the need for low tolerances during installation.

Weaver rails have a slot width of 4.57 mm but aren’t consistent in spacing between each slot, meaning that the grooves of two different Weaver rails may not align with each other. This is fine if you only use one firearm. However, if you have two guns, each with a Weaver rail, there’s a chance that your scope that fits with one won’t align properly with another.

Other rail systems are based upon the Picatinny and thus will accommodate most accessories, but the Weaver will generally only accept attachments designed specifically for it.

These rails are popular among hunters because the 2-piece system means that the bolt-action rifles’ ejection part isn’t required. Modern rail systems tend to hamper cartridge loading for bolt action guns. Weaver systems also tend to be less expensive than its modern counterparts. 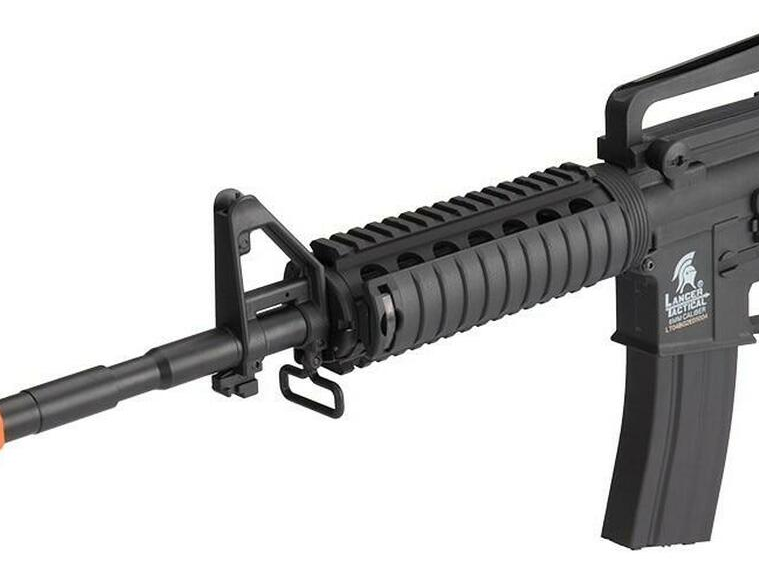 Currently the most widely available rail system for real firearms and airsoft guns, the Picatinny Rail System became the U.S. military standard in 1995. Officially known as MIL-STD-1913, it has seen such widespread use that many manufacturers release products with Picatinny rails already installed. The rail itself was named after the Picatinny Arsenal in New Jersey, which was tasked to create a standard rail mounting system in 1992.

Because of its popularity, most of the accessories and attachments available today will be readily usable with the Picatinny. Even old scopes designed for a Weaver will slide onto the Picatinny’s wider slots.

A clear disadvantage of the Picatinny is that it can be rather bulky, especially when not in use. Because it usually covers the length of the barrel, it can make handling of the weapon rather cumbersome. However, when fully utilized, this rail system truly shines, as it can hold multiple attachments at once and are available at the 12, 3, 6, and 9 o’clock positions, making it very versatile. 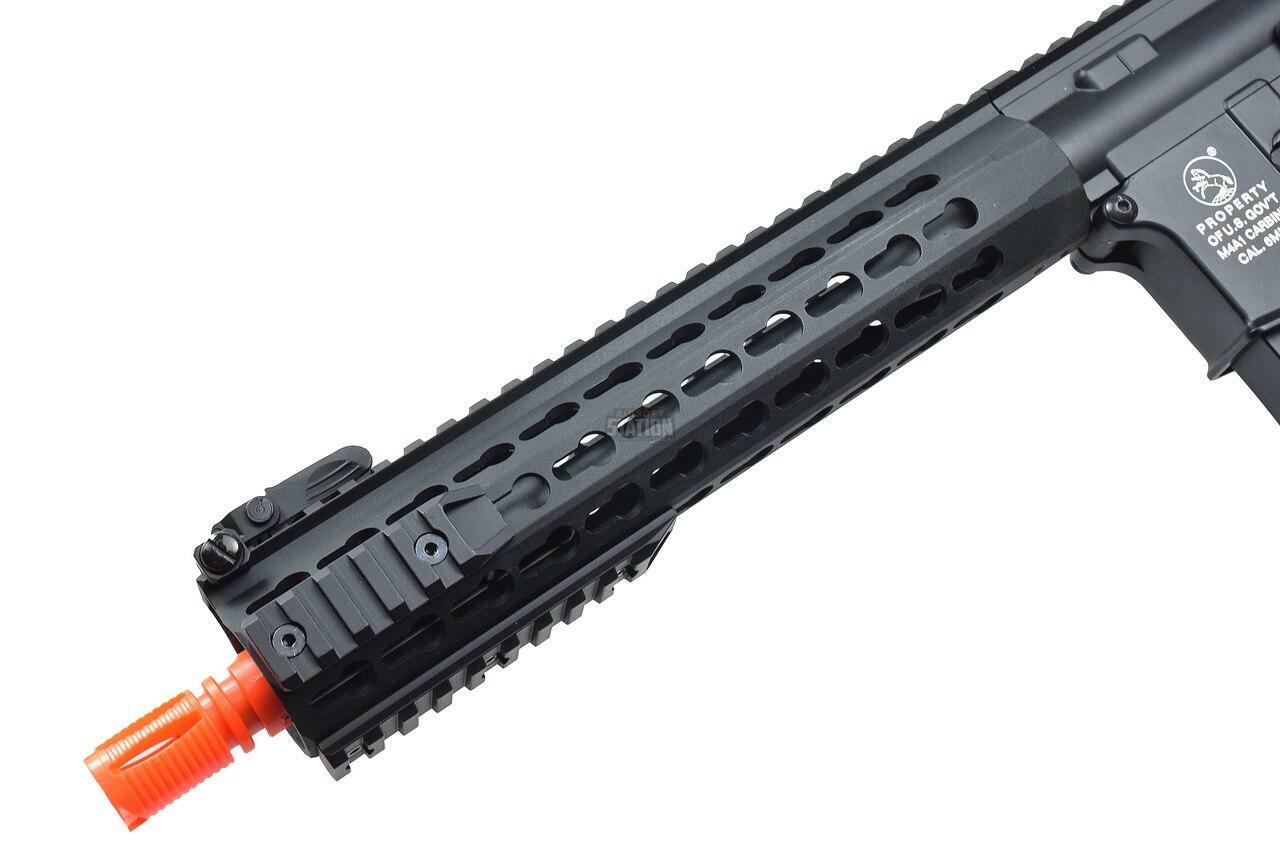 In 2012, the Keymod system was a recent attempt to replace the Picatinny as the standard. This rail mounting type uses keyhole slots instead of horizontal rails. In addition, the handguard itself becomes the attachment point making the Keymod lighter and less bulky than the Picatinny.

The Keymod became popular quickly, but the emergence of the M-LOK a few years later has preempted its acceptance as the standard. This is the reason why there weren’t many accessories that were created for the Keymod system. However, it is a lot cheaper than an M-LOK rail. It has many advantages compared to the Picatinny, and if you can get compatible attachments, it’s an excellent investment.

The Keymod system is more flexible than Picatinny as you have more leeway in attaching your accessories. Instead of fixed slots, the keyholes of the Keymod rails give you the ability to adjust the distance of where a scope or tac light is located.

However, a disadvantage is that most weapons that come with Keymod rails as a standard don’t have much rail space available. Therefore, it can limit the number of accessories you can attach. The availability of Picatinny adapters and Keymod rail upgrades does alleviate this somewhat. 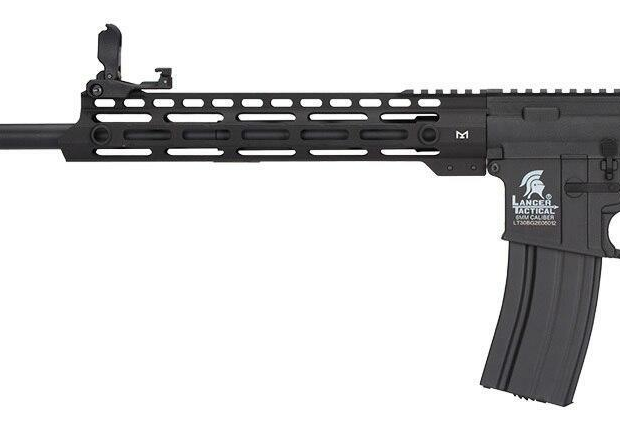 M-LOK is the newest rail system innovation on this list. Although it was designed as early as 2007, full-scale production was only started in 2014, two years after the Keymod system was released. Seeking to improve on the incompatibilities of the Keymod with polymer attachments, it uses slim holes instead of key slots to attach accessories. This gave more flexibility to the system, making the distance at which attachments can be placed almost fully customizable.

To promote M-LOK as a standard for modern firearms, the company that designed it, Magpul Industries, released it as a free license system. This meant that, although a license was still required, anyone could incorporate the M-LOK into their designs without paying royalties.

Although few manufacturers have adopted the M-LOK as a factory standard, it’s steadily growing in popularity. However, this means that the only way to get an M-LOK system is to buy a separate kit to install on your gun. Because of this, the M-LOK can be relatively expensive compared to other rails systems on this list.

In terms of attachments, any accessory that will fit Keymod rails can be easily accommodated by an M-LOK. In addition, polymer attachments that were incompatible with Keymods can be fully integrated into an M-LOK system. It shares Keymod’s disadvantage, however, of having less rail space for weapons that do come with the M-LOK as a standard. Upgrades to the system are readily available if the user wants more attachments.

Because there are so many attachments available for both real and airsoft guns, choosing the right one may seem daunting. Knowing the differences between rails systems, whether M-Lok, Picatinny, Weaver, or Keymod, it’s easy to determine which accessories go with your weapon. Hopefully, this article has helped you decide which system and accessories better fit your firearm.