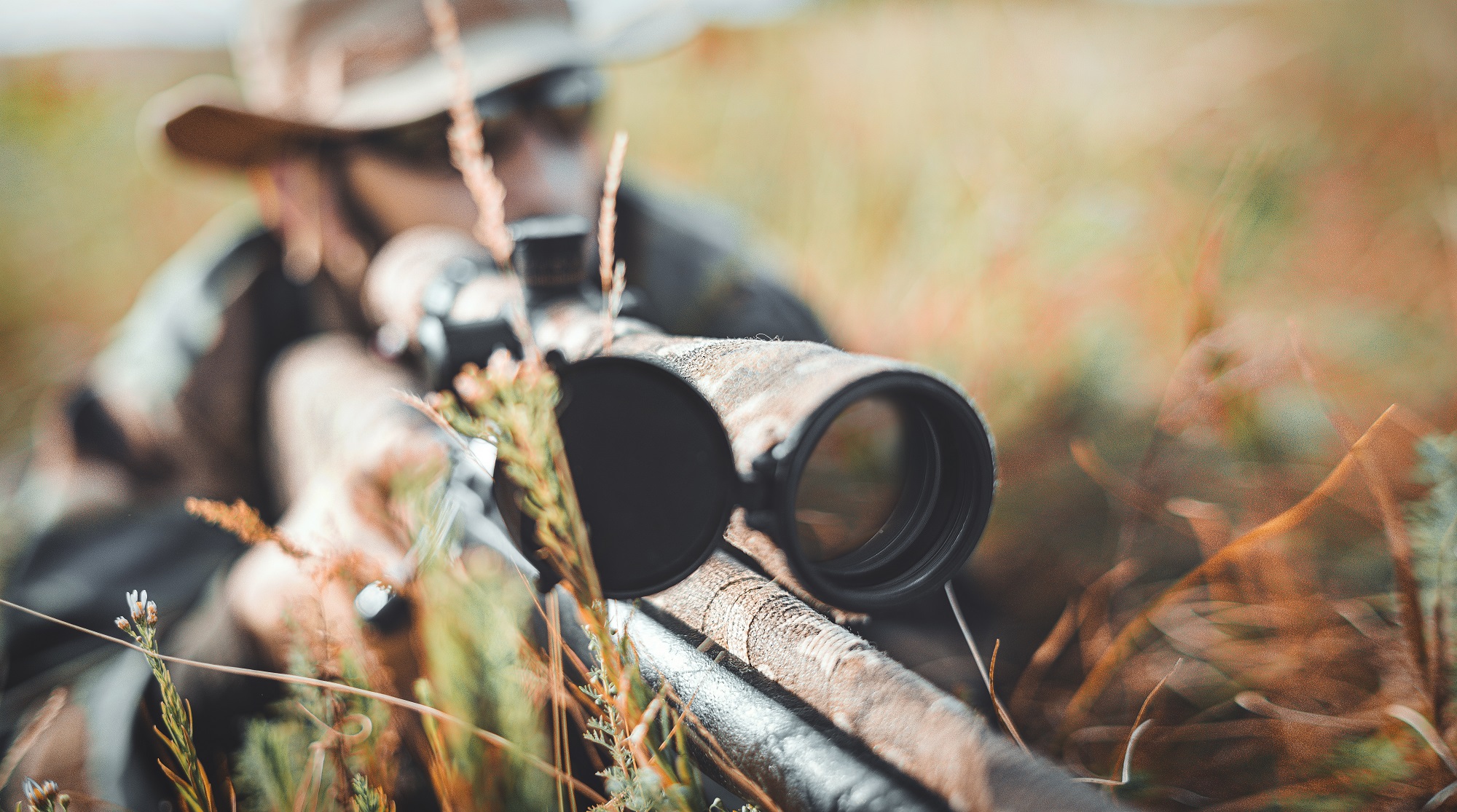 Most shooters’ usual perception of air guns is that they’re for target shooting, but hunters have been using these weapons for hunting since the 15th century. During these times, air rifles were expensive and only used by the rich. Over time, technology improved to the point that mass-produced examples are now available to the public at affordable prices.

Today, air guns are still used for hunting, especially for small game. “Small game” refers to animals like ducks, squirrels, turkeys, and many other species. Not all of these creatures are sought after for meat, as some prefer to hunt for sport.

No matter your reason for hunting, it’s best to arm yourself with a reliable air gun. They’re much quieter than unsuppressed firearms and usually less regulated. Some states are more air rifle-friendly, making them a viable choice instead of owning a small-bore hunting rifle.

Below are six of the best air rifles for hunting small game. They possess enough firepower to kill prey ethically, and you can even mount accessories on them. Read on to find out all about them.

The rifle has a built-in Whisper Fusion system for less noise when you shoot, forcing the gasses inside chambers that dampen sound.

The internal magazine holds 10 pellets, though you need to break the action open after every shot. Shooting is effortless thanks to a customizable two-stage trigger and recoil-absorbing buttpad. Your shots will only hit where you want them to go.

A 3-9x40mm scope is included in the package, and it will attach to the rifle using 11mm dovetail scope mounts. The rails are also isolated from the gun to reduce scope shaking. If you don’t want to use the scope, the iron sights will work in low-light conditions, perfect for handling pests at night.

The all-weather stock is made of black polymer, a light but durable material that endures field use easily. Its design is ergonomic and molded to fit shoulders.

Compared to the Gamo Swarm Fusion 10X, the Swarm Maxxim 10X is an older model, the second generation of the first-ever repeating 10-shot air rifle. It’s more affordable than the Fusion, but don’t count this weapon out. You can still shoot very quickly and accurately with it.

The Swarm Maxxim 10X Gen 2 has an upgraded magazine that sits lower to the barrel. It won’t interfere with the optics as a result. As the name suggests, the air rifle holds 10 rounds at most.

Thanks to the Custom Action Trigger, you can adjust the trigger pull’s two stages to your preferences. Doing so allows your finger muscles to shoot without feeling awkward, as everyone has a different comfort zone.

Gamo’s patented Whisper sound dampening technology is also mounted onto the barrel. It will capture the gasses that propel the pellet out, reducing the noise produced. That way, you can hunt without causing a disturbance.

With the help of a recoil-reducing scope rail and rubber buttpad, you can expect to shoot accurately. The included 3-9x40 scope will fit the 11mm dovetail scope mount.

Unlike the two Gamo air rifles above, this Crosman Valiant SBD is a single-shot weapon. It has no magazine for extra shots, meaning you need to reload every time. However, there are advantages to a single-shot gun.

Precision is the main benefit, as repeaters promote rapid fire. Single-shot guns also conserve ammunition and prevent misfires since you can’t stuff more than one into the chamber.

Crosman’s experience with air guns led it to employ a Nitro Gas Piston Elite instead of a steel spring. As a result, it can retain its strength despite staying cocked for hours, and the cocking action is smoother. What’s more, it works perfectly fine in adverse weather.

The Clean Break Trigger on this rifle has two stages when pulling, allowing shooters to pull the trigger slowly for a perfect shot. The stages are also adjustable according to your preferences.

As the rifle is meant for single shots, the barrel is a fine example of engineering. The rifling is precise and optimizes the pellet spin. There are also mounted iron sights on the barrel if you don’t want to use optics.

By default, the package comes with a CenterPoint 4x32mm scope, a fixed zoom optic that mounts onto the 11mm dovetail rail.

Those who want a .22 caliber single-shot air rifle will appreciate this Crosman Shockwave NP QuietFire Air Rifle. It’s painted black, and the polymer furniture is also of the same color. You can use it in any weather conditions due to its polymer stock.

Thanks to the Nitro Piston power plant, this air rifle can deliver performance most springs can’t. Springs can’t deliver 950 FPS after staying cocked for hours, but the Piston can. You’ll also find the weapon easier to cock quickly.

The QuietFire technology mounted on the barrel near the muzzle also helps reduce noise levels. It forces air to pass through two chambers, decreasing sound as it exits them. Thus, you can hunt for small game in larger numbers.

Good hunters know the importance of getting familiar with their weapons, and customization helps them create their perfect rifle. With the two-stage adjustable trigger, anyone can set where each stage is located.

You get a fixed magnification scope that mounts to dovetail rails on top of the bolt with the rifle.

With this MAG-Fire Mission Air Rifle, hunting down pests and small game won’t be an issue. The magazine contains 10 rounds for this .22 caliber version, and the powerful Nitro Piston Elite propels them at 975 FPS. If there’s more than one animal, the MAG-Fire Mission can hit them all.

Crosman integrated its patented Quietfire technology into the barrel to reduce the rifle’s report. It helps reduce the sound immensely, so the small game doesn’t get startled as frequently. However, it doesn’t suppress the weapon entirely because ammunition is also a factor.

Accuracy is the name of the MAG-Fire Mission’s game. Several of its features are optimized for landing shots exactly where you want them. The rifled steel barrel, 11mm dovetail rail, and 4x32mm scope are all there for precise marksmanship.

That’s not all because you can also adjust the two-stage Clean Break Trigger on the rifle.

Hunting can occur in any location and weather condition, so your air rifle should be capable of withstanding damage. Although wooden stocks are beautiful, they may scratch and crack. In contrast, the thumbhole synthetic stock is ergonomic and lightweight, allowing hunters to carry this rifle for long periods without tiring.

Polymer stocks are also highly resistant to cracking, so you can expect them to stay intact despite some rougher treatment.

Despite this many components, Crosman opted to go for simplicity. The fewer moving parts there are, the lower the chances of malfunctioning.

While .50 caliber air rifles were designed for big game, nothing prevents you from hunting small game with them. However, you do have to be aware that .50 leaves a larger bullet hole in the animal, so it may ruin the meat if you want to eat it. That said, Umarex’s Hammer air rifle is a powerhouse.

You can load this air rifle with heavier slugs and still expect to hit 760 FPS. This velocity might not be much, but the bullet retains more energy than lighter slugs. Thus, it will do extra damage to whatever you’re shooting.

The Hammer has two shots in the magazine, and the PCP tank has enough for three shots at 100%. The fourth shot will reach around 90% of maximum velocity before requiring a gas refill.

Besides the Picatinny top rail, you also have side M-LOK rails for extra accessories like lights and lasers. These help in low-light conditions or for aiming.

The German firearms company Walther manufacturers the barrels on the Umarex Hammer, giving it a 1:24 twist that helps the .50 caliber slug fly true. The barrel will last for years, a testament to German engineering and Walther’s almost 200 years of experience.

What pellets are better for small game?

.177 caliber and .22 caliber pellets can work for small game. The former is usually lighter and retains less energy, despite being faster. Therefore, it may not lead to a clean and humane kill in some cases.

In contrast, .22 caliber pellets are generally slower but heavier, retaining more energy despite the lower muzzle velocity. Most people consider it the smallest caliber for hunting small game.

Despite this, it’s possible to hunt for small game with .177 caliber pellets. It takes more practice to nail an ethical kill, but it’s still doable. The caliber is more suited for the smallest of small game and pests.

No matter what rifle you own, make sure it’s powerful enough to take small game down before you go hunting. You don’t want the animal to suffer from a weak shot, so letting them pass on painlessly is the best option.

Can any scope work on an air gun?

No, as spring guns and piston rifles are actually very forceful weapons in terms of recoil and kick compared to firearms. They may damage your scope badly after extended use as the mechanisms produce a lot of vibrations. Therefore, it’s best to mount a dedicated optic on your air rifle for longevity.

Some air guns offset the problem by isolating the rails, but it’s not a foolproof solution. You’ll find air rifle-specific optics much better than a standard rifle scope you mount on your .22 LR plinking rifle.

Despite the magnification, air gun scopes may also be designed to work better at closer ranges. Therefore, they will be easier to sight in after a shooting session. Firearm scopes may not cooperate with the air rifle this way, so their performances can be subpar.

Most hunters still prefer using firearms for small game, as cartridges are powerful and easy to obtain. However, air rifle hunting only rose in popularity decades ago, and companies continue to innovate and release better weapons.

It’s possible to grab your air rifle, cock it, and take out the squirrel in your yard without the neighbors finding out. Air gun technology has become advanced to the point that they make very little noise. No one will find out you’re doing pest control on your property.

The air rifles we covered range from repeaters to single-shot guns. Whether you prefer making one precise shot or taking out several creatures, there’s something for everyone here. The rifles are also optimized for hunting, with enough velocity and retained energy to propel projectiles at acceptable speeds.

Air guns are safer in most cases, and they’re often quieter. Hunters prefer their prey to stay close for a shot, so scaring them away is less likely to happen with air rifles. However, consult your local laws before purchasing an air rifle.