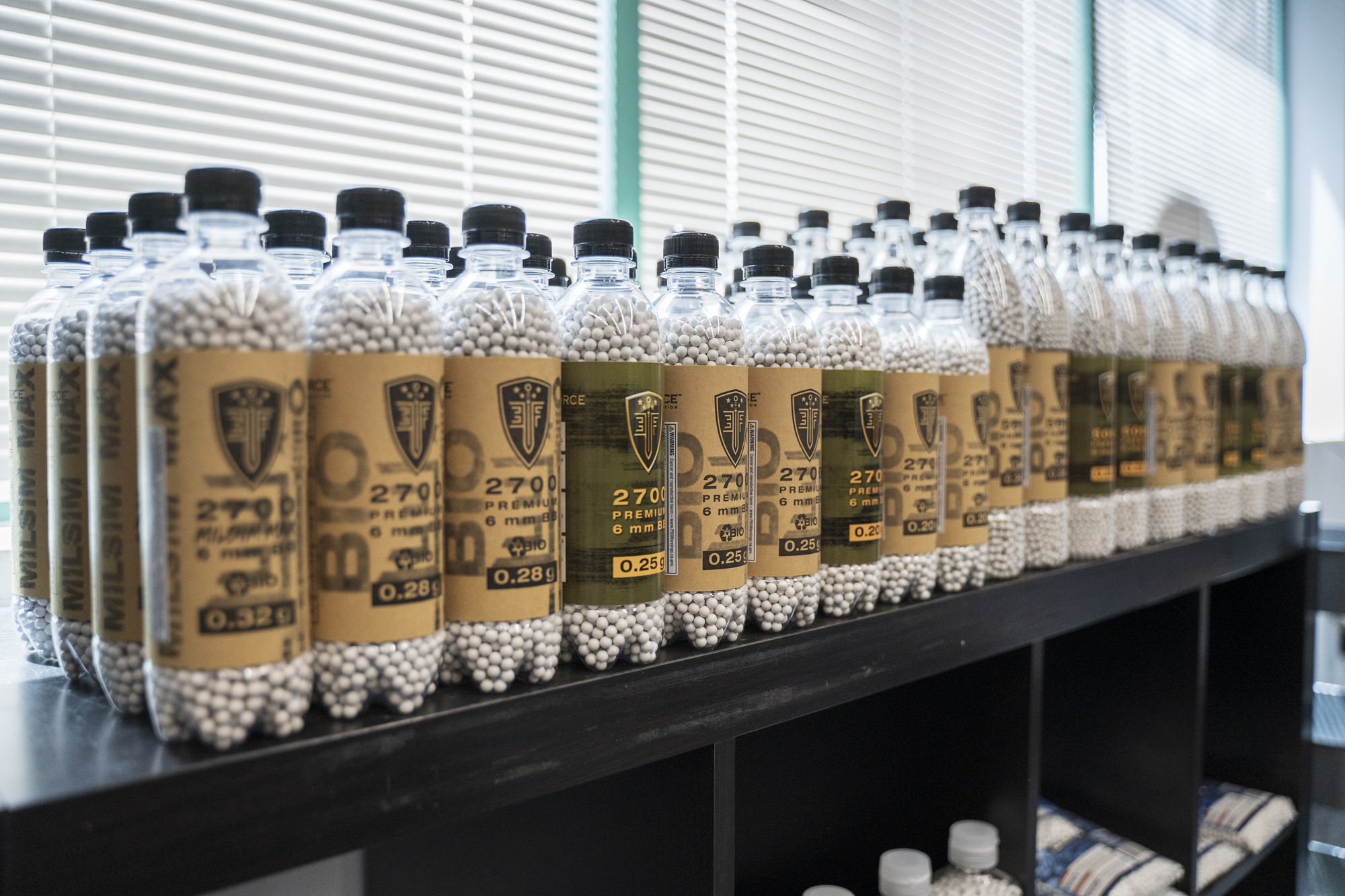 When you first get introduced to airsoft, you might only want to learn about the guns, but neglecting ammunition types can be disadvantageous. Using the wrong BBs with your weapon may cause injuries or permanently damage your gun’s gearbox. There’s also the question of going with biodegradable BBs or normal plastic ones.

Which BB is the right option?

If you’re unsure, you’ll find detailed answers to your common BB questions here. By the time you reach the end, you’ll have a better idea about the proper BB and be a better airsoft player for it.

Most people in the airsoft community own airsoft weapons chambered in 6mm BBs since it’s the standard caliber. Practically every modern gun uses it, and you’ll find this caliber in every airsoft store. Resupplying is made easy as a result.

However, outliers like 8mm BBs exist. These BBs are usually reserved for rare guns or sometimes shotguns. For example, Marushin makes 8mm Mossberg shotgun and Kar98K replicas, but these guns are likely discontinued.

8mm BBs have a higher muzzle velocity and impact, but they’ve become less common in recent years because many venues ban them.

Unless you’re a collector, we recommend getting a gun that fires 6mm BBs.

What Are BBs Made Of? 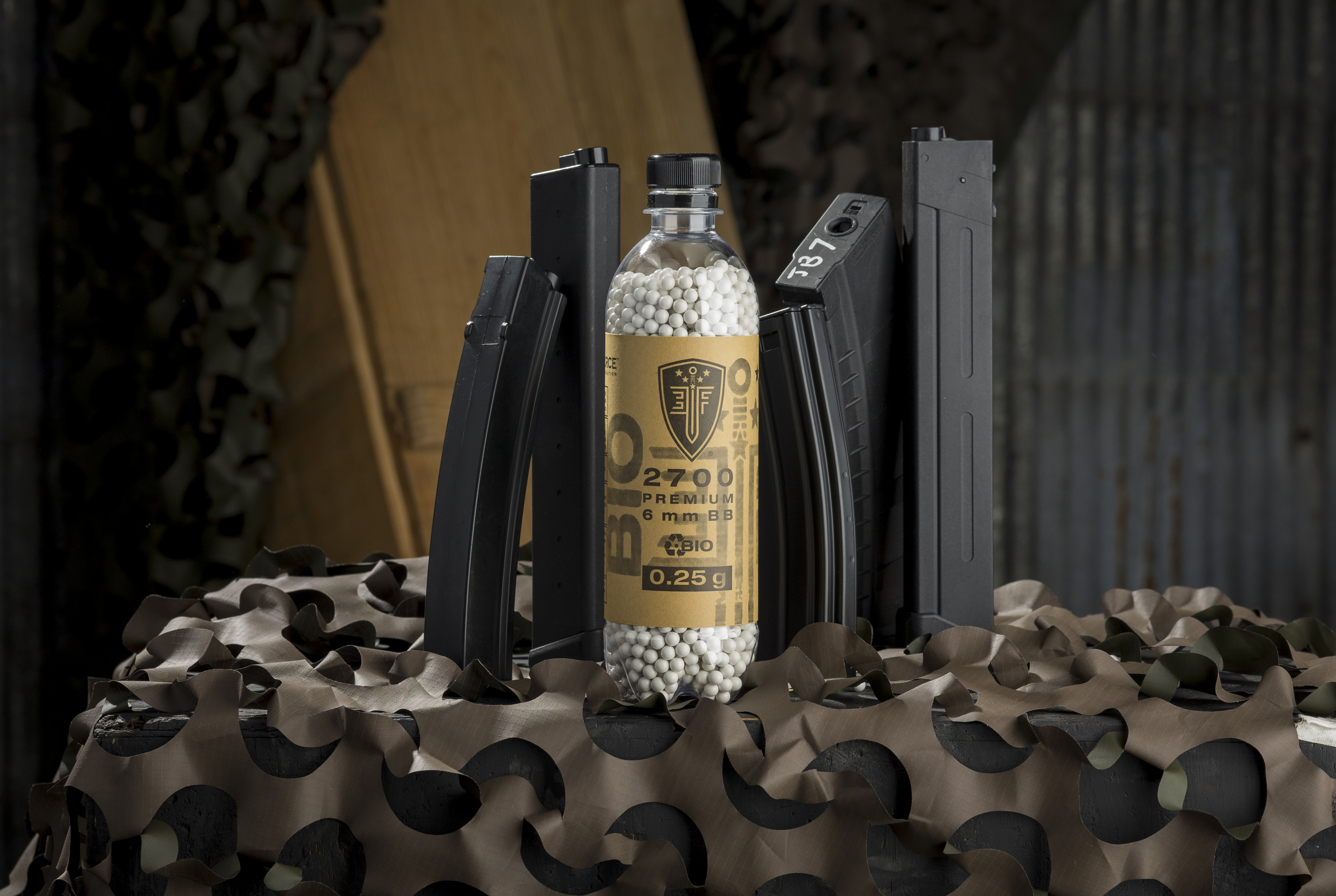 It’s common knowledge that airsoft BBs are all made of plastics, but there are several types. A cheap BB is usually made of ABS plastic, also the same plastic as Lego pieces. Although it’s the least expensive type, ABS BBs have been banned in most venues, so you want to stick to other types.

ABS plastic takes so long to degrade. According to some sources, it can take as long as 1,000 years to break down. Consequently, most arenas disallow the use of these BBs to protect the environment. ABS can’t be recycled, so it all goes to a landfill.

However, you can reuse them for airsoft claymores and grenades. They don’t damage barrels or gearboxes that way.

In contrast, biodegradable BBs are made of PLA plastic, a material that will eventually break down into water and carbon dioxide. PLA stands for polylactic acid, and it’s safe for the environment.

Manufacturers make PLA BBs using corn starch or other natural ingredients. Because they take 90 days or more to break down, many locations make their use mandatory.

Metal BBs exist, but they’re not designed for airsoft use. Target shooting and pest control are two of this projectile’s primary purposes, as getting hit by these metal spheres can result in injury or even death. To prevent airsoft guns from firing metal BBs, they’re often made in 4.5mm caliber.

Yes, they actually matter a lot and will depend on the gun you use. If you use the wrong BB weights, your gun’s performance will decrease at best. In some worst-case scenarios, your weapon might sustain damage.

Some of the most common BB weights are:

There are even heavier BBs, but you don’t see airsoft players often using them.

Today, many electric and gas-operated airsoft guns are meant to fire 0.20g BBs at a minimum. Anything lighter will have an unstable flight path and therefore reduce accuracy. When in doubt, stick with 0.20g BBs.

BBs weighing 0.12g are hollow inside and should only be used with cheaper spring-powered airsoft guns. If they go above 250 FPS, they tend to veer off the target. Using them in AEGs can even result in the round shattering inside and crippling your motor.

These projectiles are ineffective at longer ranges, so you shouldn’t expect them to hit anything far away.

Anything above 0.20g will depend on your airsoft gun’s maximum muzzle velocity. Generally, the higher the speed, the heavier your BBs should be. That will let you stay inside the optimum zone and prevent underpowered and inaccurate shots.

Assault rifles can work with 0.20g to 0.28g BBs fine. Beyond these weights, you should only use them for designated marksman rifles or sniper rifles. These guns are meant to hit long-range targets, and thus a heavier BB will increase accuracy.

A projectile with more weight and faster velocity to compensate tends to be stable and flies straighter even in windy conditions. That’s why snipers who own higher-powered guns will use weights above 0.32g.

When purchasing BBs, you should always start with 0.20g ones. After some time, you can begin experimenting with heavier BBs. Modified guns will have varying performances depending on weight, so try out a larger variety before settling with what you like.

What Types of BBs Are There?

Both biodegradable and standard ABS BBs come in different types for general or specialized purposes. They don’t require changes to your gun, for the most part. The exception is tracer BBs, which need a particular muzzle device or magazine. However, your weapon’s internal components can be left as they were for using these.

The most common BBs you see in any airsoft arena or range are bright spheres that litter the floor. They come in colors like white, orange, yellow, and many more. A brilliant color allows users to spot where the enemy fire is coming from.

The shooters themselves can also use bright BBs to check their weapon’s projectile fight path. They’re excellent for testing different weights and hop-up adjustments. The ability to see them fly always makes these tasks more convenient.

When in doubt, get yourself a big bag of standard BBs. You can never go wrong with these as they come in various weights.

Untraceable BBs are the direct opposite of tracers and bright standard BBs. They’re identical to the latter but come in darker colors like black, olive, or dark grey. With these BBs, your shots are much harder to detect, especially in low-light environments.

If you can’t see where the BB is going, your opponents can’t see them either. After calibrating your airsoft gun, we recommend using these to ensure it doesn’t affect your accuracy. Stick to the exact weights as before to ensure optimum performance.

Real-life tracers are bullets coated with chemicals that ignite after firing, creating a trail of light that helps gunners figure out where their shots are hitting. However, BBs don’t burn, so the makers of tracer BBs use phosphorescent plastics.

Phosphorescent plastic can retain light after being exposed to it. When the plastics gather enough energy, you can see it glow in the dark. It’s not a harsh light but a soft glow that is pleasing to look at.

Most of these BBs come in green and white, but a few brands produce red tracers. Some brands also have blue and purple ones, which are less common but will surely catch everyone’s eyes.

There are three main ways your airsoft gun can provide a source of light to these BBs. You can use a tracer magazine, a muzzle-mounted device, or a tracer hop-up.

The magazines contain a built-in light and continuously shine on the BBs to charge them. When you pull the trigger, your weapon unleashes a stream of glowing BBs. These are a sight to see at night.

If you’re not a fan of the magazines, you can also use a muzzle-mounted tracer. It can be disguised as a suppressor or muzzle brake. They’re the more convenient design since you only have to replace the battery, and the BBs will shine.

The final option is relatively uncommon, as tracer hop-ups are more complex to install. However, you won’t have to worry about the component bumping into the environment as it’s located inside the rifle.

Out of these options, the best is the muzzle device since it’s convenient and doesn’t require modification. Tracer magazines are mostly limited to M4 NATO STANAG-style magazines, and tracer hop-ups are hard to find. However, you can pick any you prefer if you understand the trade-offs.

As the name suggests, the best time to use tracer BBs is at night, but dark indoor venues are also a suitable occasion. Adjusting your fire according to the BBs’ flight path is one advantage of using them. It’s even possible to load most of your magazine with one color and have another pigment near the end to show you’re almost out of ammunition.

Some venues allow teams to use different-colored tracers and see who’s who in dark arenas. For example, one group can use green tracers while the other fires red ones.

BBs bounce when they hit something, so you can check if your BBs collide with enemies.

The downsides of using them are that everyone knows where you are, and people can sometimes dodge incoming gunfire. Additionally, tracers aren’t very versatile when it comes to weight. They’re usually on the lighter side.

Despite these drawbacks, many airsoft fans love this type of ammunition. They make the game entertaining at night and always create a fantastic light show.

When to Use What – Biodegradable BBs 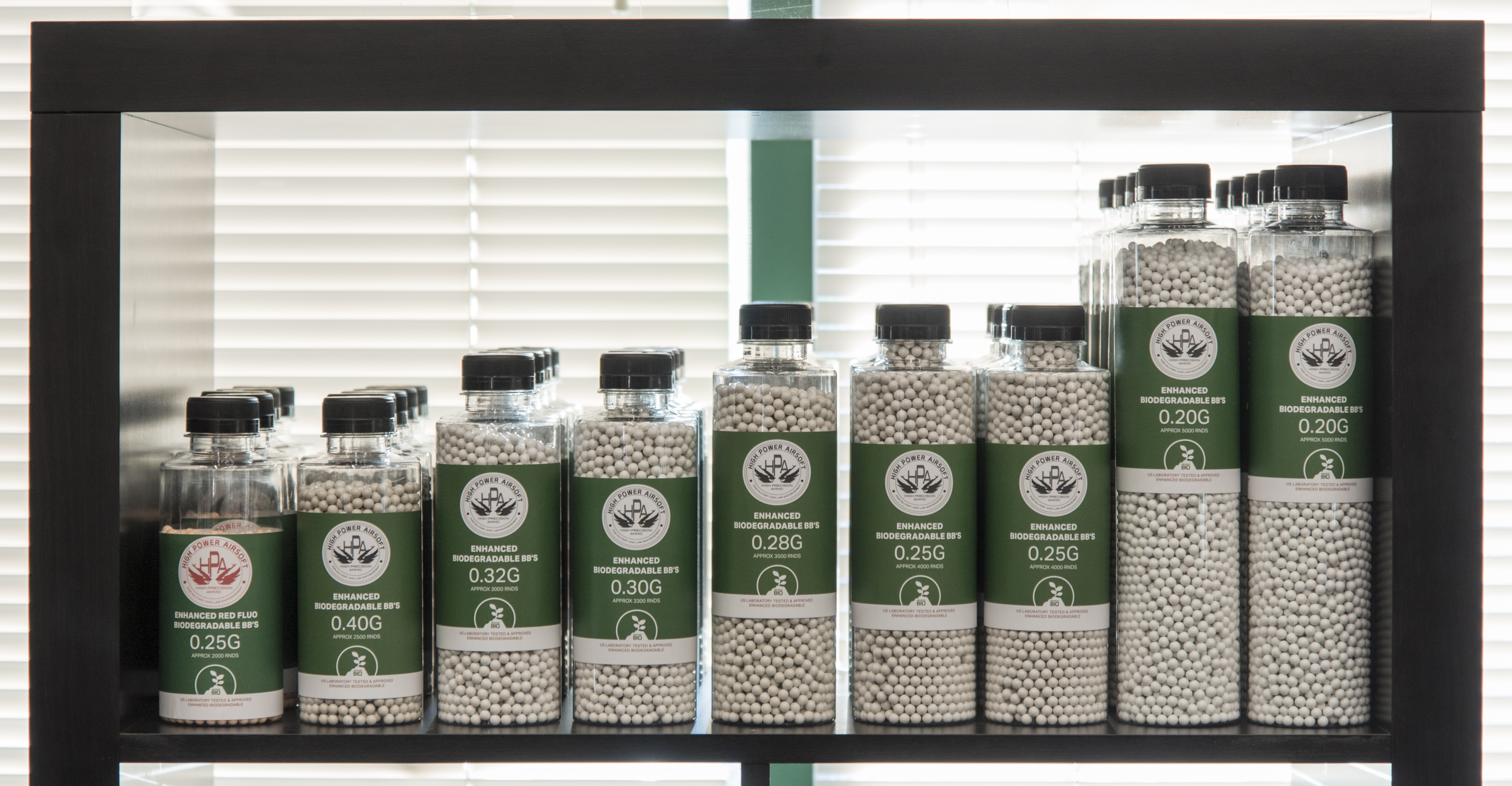 Most biodegradable BBs act the same as their ABS counterparts when fired from an airsoft gun. The standard ones, tracers, and all others work identically, so you can use them with the proper weapon and according to situation demands.

However, it’s best to replace your standard BBs with biodegradable ones since venues are now more environment-friendly. Therefore, you should stock up on several thousand rounds just in case. Many retailers sell them in large quantities so that players can stock up.

All of the rules related to the various BB types apply to biodegradable and standard ones.

Is It Worth It to Buy More Expensive BBs?

We believe that biodegradable BBs are worth spending extra on primarily due to the venue requirements. However, it’s also true that ABS BBs are terrible for the environment. They can get reused as claymore ammunition or stuffed into sandbags, but ABS is still not going away. The only other place standard BBs are going to is the landfill, where they’re destined to stay for around 1,000 years without much degradation.

Cheap, biodegradable BBs are available, but you should avoid them. Costlier BBs are made to perfection and have almost no imperfections, dimples, and seams. They will feel smooth and fluid in your hands.

Poor quality BBs sometimes deviate significantly from the 6mm diameter and weight. These differences can reduce consistency or even cause problems with your gun.

Seams and dimples are some of the worst possible things to find on your BBs. They can cause BBs to jam when feeding, resulting in cracking projectiles. In addition, the plastic will go all over the internals and cause further issues. While cleaning the gun isn’t too tricky, you might miss some fragments that can come back and haunt you, causing malfunctions in the middle of a firefight.

The bottom line is that it’s always a good idea to spend extra on your ammunition. Premium ammunition guarantees a consistent airsoft gun experience. Like in real firearms, your weapon is only as good as your ammunition.

Remember that even though it’s expensive, reusing BBs in your airsoft guns is a bad idea – even if they look unharmed. The BBs can have microscopic faults you can’t see. Instead, consider reusing them in airsoft grenades and claymores, in which projectile quality doesn’t truly matter.

Learn About Your Ammunition 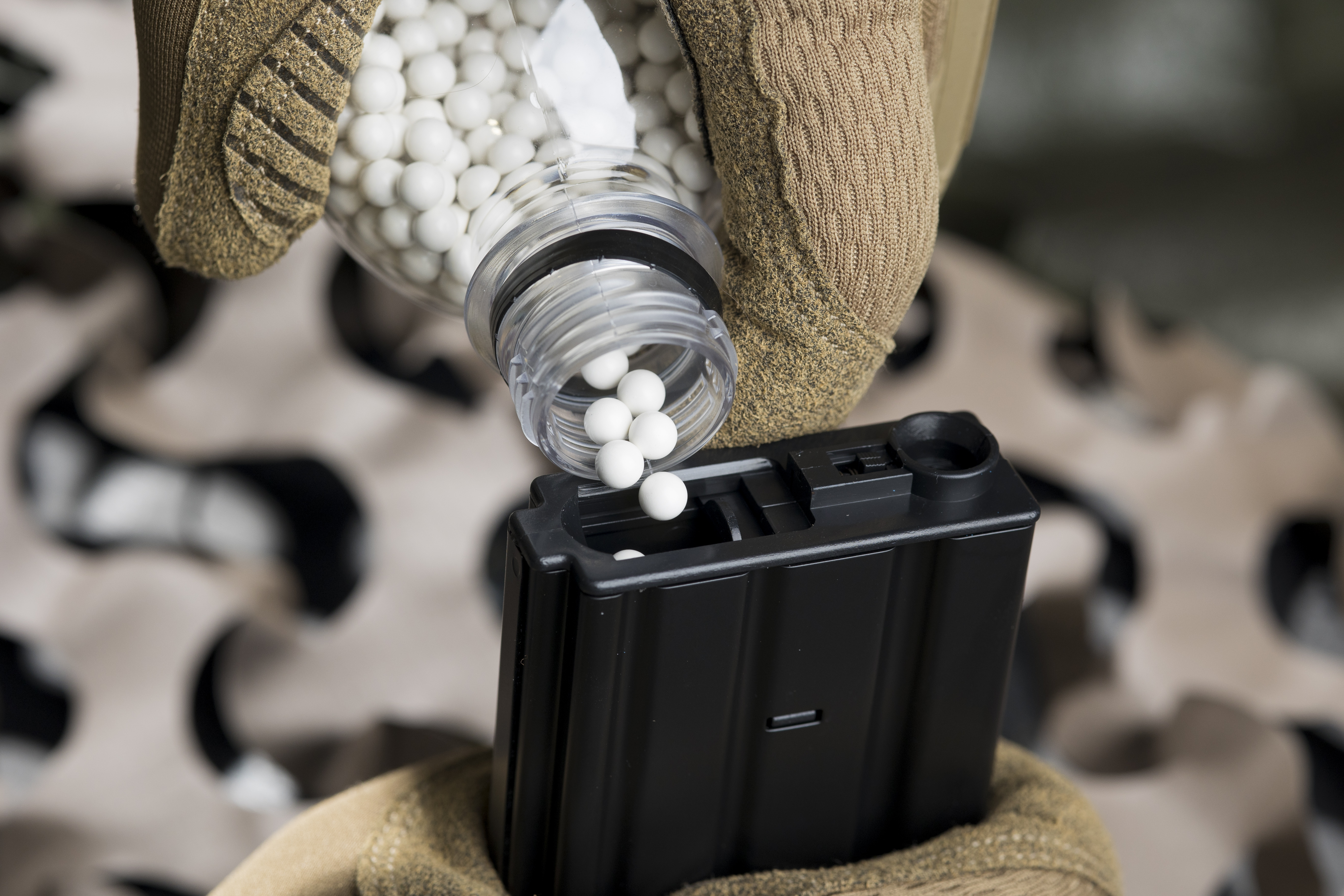 Good BBs will bring out the best when fired from your airsoft gun, and each weapon has a different temperament. Therefore, we recommend studying your particular model and seeing if other users recommend certain weights or BB brands. You can test the ammunition yourself when you purchase several packs of BBs.

The more you spend time studying these projectiles, the better you’ll understand the game. It’s a field with lots of depth, so there’s always something to learn.

In the end, there’s no perfect BB – it all depends on your preferences and weapons. With enough experimentation, you’ll find the ideal ammunition for your needs.