Maintaining The Gear Box and Its Components in Your Airsoft Gun 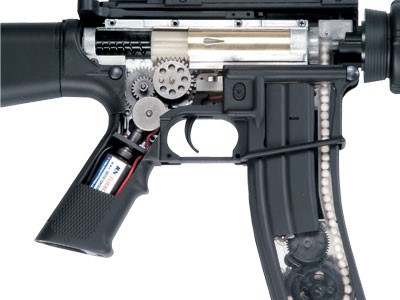 Maintaining the Gear Box and Its Components in Your Airsoft Gun

Repairing your airsoft gearbox is crucial if you’re experiencing any issues with your gun. A jammed gun is no fun, but fortunately for you, Airsoft guns are built to be easily maintained.

Inside the Airsoft Gun

Understanding the air system is crucial to working on the gun.

The air system is made out of these components:

The Piston and Components

The piston is one of the hardest working parts of the Airsoft gun and is susceptible to abuse especially when guns are customized or upgraded. Dirt build-up in the piston can result in stripped teeth and broken o-rings, which affect the functioning of the gun. Upgrading certain guns and gear box components incorrectly can cause failure and also result in damage to the gear box.

Metal pistons can be a solution to getting longer-lasting performance from your gun, but also come with their own maintenance requirements. As the metal piston wears, it can chip off and leave metal shavings in the gearbox that further accelerates the wear of the entire gearbox. Without regular cleaning, these shavings will mix with the oil and gearbox grease and break down components like the rubber O-rings and other mechanical parts in the gun. Metal pistons definitely alleviate the problems caused by cheaper pistons, but require their own maintenance. So they are not simply a quick fix to the problem of gearbox maintenance.

Thinking of your piston like the tires on a car is a helpful analogy for understanding how they work in relation to the gun’s performance. Much like a car’s tires, the Airsoft gun’s pistons are worn with use and will require upgrading and replacing based on how much it is used. If you are shooting regularly, then plan on keeping a close eye on the piston much like you would need to keep your car’s tires replaced, rotated, or replaced.

Is your gun having a hard time firing, or firing fine and then not firing at all? The piston O-ring might be the problem. The piston O-ring is another essential component that requires maintenance and replacement. Using the right Airsoft gun silicon oil to keep the O-ring properly lubed is essential.  Just as important is replacing the O-ring annually. The rubber will degrade with constant use, and its degradation will ultimately lead to loss of air compression and impact the performance of the gun.

The piston heads can cause more damage to your gun than you might think if not installed correctly. If the piston head vibrates loose, it can cause major damage in the gear box. Upgraded piston heads are recommended, as their anti-shock bearings and embedded metal threads can help avoid vibration damage typical of the more basic piston heads that are usually stock from the factory.

If sand, or metal chips get caught up between the piston and piston head you can expect problems with the cylinder sleeve. In fact, it can cause the air system part of the gear box to fail entirely. Air leaks caused from scratching holes in the cylinder sleeve can cause air to seep out, as can damage to the O-rings from these metal bits. Since these problems can be challenging to diagnose, it is crucial to regularly maintain these components and keep them free from build-up that will inevitably cause problems later.

The cylinder head and air nozzle are the next crucial components that need to be maintained in the airsoft gun gearbox. The airsoft gun cylinder head closes off the end of the cylinder, trapping the air created by the stroke-cycle of the piston that creates compression, ultimately forced out of the air nozzle guide. Usually, the air nozzle guide is built-in to the cylinder head body. This guide lets the air nozzle move along a guide that sends the compressed air down the barrel to connect with the BB stationed in the hop-up chamber. Most brass guides that are built into the typically PVC guide are known to break down. Replacing it with an aftermarket double O-ring completely metal version is important for avoiding major problems with a breakdown in these components later on.

A quick way to diagnose any problems you might be encountering with your airsoft gun is:

Because most airsoft guns come with basic stock parts, if you are encountering issues with the gun it is a smart move to consider investing in a parts upgrade. An airsoft gun cylinder upgrade kit is the first step to making sure the cylinder works properly if it is not. Things like a double O-ring seal, a 1 piece machined metal cylinder head, a polished-metal cylinder, a high impact ported silicone piston head with a metal insert and thrust bearing, O-ring seal nozzle, and a super high-impact reinforced piston body are all components that will guarantee high-performance, and easy maintenance even with heavy use.

In Post Image: By Ranger Captain at English Wikipedia Later versions were uploaded by Boffy b at en.wikipedia. (Transferred from en.wikipedia to Commons.) [Public domain], via Wikimedia Commons