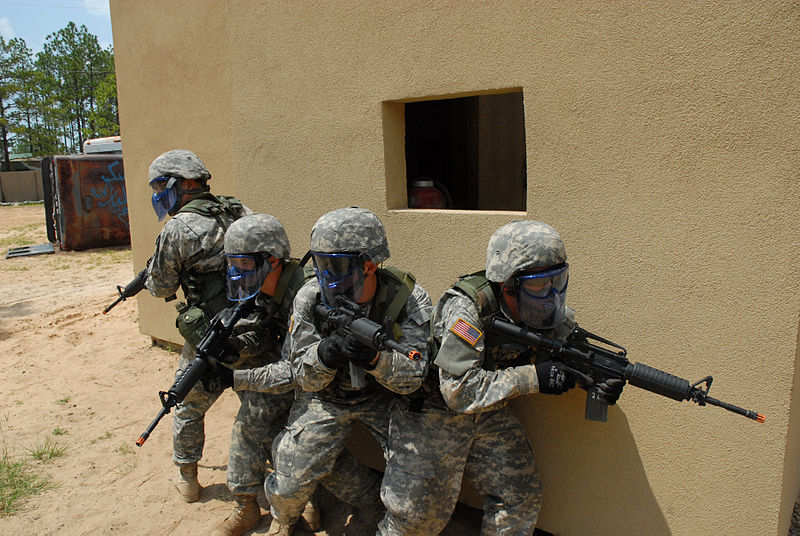 Airsoft is a growing sport that men and women worldwide participate in for various reasons, whether for firearms training or for hobby. However, even long-time players may not know all the airsoft vocabulary that the industry uses. For example, you may be aware of AEG and AEP, but do you know the differences between the two? Or what about LPEG?

Whether you’re new to airsoft or you’ve been playing for years, there may be some airsoft terms you’ve heard of but don’t quite understand. For a full list of airsoft terminology, review the terms and definitions below.

Action refers to the part of the gun which loads and discharges the bullet.

ASG is an airsoft gun manufacturer and distributor located in Denmark.

ACRs can use multicaliber munitions, change roles, and swap barrels.

ACU refers to the modern pattern of uniform used by U.S. troops. Multiple patterns are available.

AEG is short for Automatic Electric Gun, and is perhaps one of the most commonly known airsoft industry terms. AEGs are one of the most well-known types of airsoft guns available. AEGs are electric powered guns that offer high velocities and high rates of fire.

As a result from contact with the Hop-Up nub, Back Spin is a BB pellet’s rearward rotation.

Not to be confused with BB guns, BB pellets are the plastic pellets that are fired from airsoft guns. BBs are 6 mm or 8 mm.

Most commonly used by the U.S. military, BDU refers to the term used for field uniform.

Blank Firing Grenade usually takes a shot gun cartridge or a blank nine millimeters and results in a loud bang.

Blowback features are powered by electric or gas power-plants. Blowback options may be in the form of Gas Blowback, Electric Blowback, or Non-Blowback.

Carbine is a shortened version of a full-length rifle. Carbines are often used by special forces due to their lightweight build and reduced arc that brings the weapon on target.

Clip refers to the magazine used in an AEG.

CB refers to the color used in U.S. forces gear and webbing, originally used by the Special Forces and U.S. Marines.

Dead Man Walking refers to an airsoft player who has been hit and exits the game.

Duty Weapons are standard weapons that are issued by law enforcement personnel, special ops, or the military.

Effective Range refers to the range at which the combination of the shooter’s ability and the gun’s capability can deliver an accurate shot.

Feet Per Second is an important unit of measure which measures velocity. In airsoft play, velocity refers to the speed at which an airsoft gun can fire.

Referring to the tip of the airsoft gun, Flash Hider is designed to look like the flash containment device found at the muzzle of many military assault rifles. In the U.S., all airsoft flash hiders must contain a minimum of .25” blazed orange.

When a player squeezes and holds the trigger, the constant firing of ammo will result until the bullets are exhausted or until the shooter releases the trigger.

Gas Blowback is a feature that only certain airsoft guns provide. Gas blowback simulates the recoil of a real gun.

Gear Up refers to players putting on face and eye protection, and other protective clothing and gear before engaging in an airsoft battle.

Green gas is a propellant used in Gas Blowback guns to provide the simulated recoil feature. Green gas is generally a mixture of silicone oil and propane.

HFC-143 is a propellant used in gas-powered airsoft guns. This gas is also used in refrigerators and air conditioners.

Also referred to as High-Cap or High-Caps, these terms are used to describe manually or electrically-controlled airsoft magazines containing between 300 to 5,000 pellets. In airsoft, larger capacities are always an advantage, making these magazines the most commonly used magazines in airsoft play. However, high-cap magazines are not permitted in many competitive airsoft events.

Honor System is an ethical conduct standard used by airsoft gamers. When a player is hit, he voluntarily acknowledges that he has been hit and removes himself from the battle.

Also referred to as Hop-Up, this term refers to the backspin created on a projectile by the rifling used in the barrels of actual firearms. This adjustable mechanical system causes BBs to pass through the Hop-Up and spin backwards, which extends the range of the BBs flight. This allows the shooter to engage targets at further distances.

In the U.K., Imitation Firearms are two-toned devices which can be purchased by individuals over 18.

Laser refers to a target acquisition device that mounts on the accessory rail and projects green or red laser lights that may be adjusted to match certain points of aim at a specified distance.

These guns are less powerful and are usually less expensive versions of AEGs. While they are similar to traditional AEGs, they fire at lower velocities.

Magazine refers to a fixed or removable compartment that holds a volume of ammunition to be fed into the firing device.

Mainspring is a coiled spring compressed to power the internal piston of a Springer or AEG device.

Mechbox is the heart of an AEG device. Using electrically-powered spurred airsoft gear, the Mechbox compresses and releases the mainspring that powers the piston. This results in creating the compression chamber PSI which is needed to send the BB down the barrel, aimed at the target.

Some airsoft players engage in a military-themed role playing setting, referred to as MilSim. Teams generally remain on the field until their objective has been reached or until they reach their time limit.

MPEGs are less powerful than true AEGs, but are also less expensive. However, MPEGs are powerful enough to be considered an affordable and practical alternative to AEGs.

MOLLE refers to the loops added to tactical belts and vests, which additional accessories may be attached to.

Multicam is a multi-camo pattern developed for the U.S. Military Future Soldier Program.

Non-Blow-Back refers to airsoft pistols, where the slide doesn’t move back and forth as the pistol fires.

Olive Drab is a color which is often found on military uniforms and accessories.

Own refers to the players that have been shot during the game. For example, a player may announce that he or she has owned two enemy troops during a battle.

Pain Penalty refers to the level of ouch factor when hit by an opponent’s ammunition. The Pain Penalty is much higher the closer the opponent is in range.

Plink or Plinking refers to the informal firing at targets or tin cans.

POA refers to the Point of Aim.

POI refers to the Point of Impact.

RAS is a specific kind of accessory interface system.

RIS refers to a simple standardized solution for accessorizing firearms, airsoft guns included. RIS refers to the interchanging of accessories, including sights and scopes in the field.

Rail Interface System refers to a flat, slatted rail that attaches to weapons systems and allows a multitude of accessories to be mounted to the device.

Real Steel refers to the real-world counterpart of an airsoft gun.

To purchase a Replica Imitation Firearm in the U.K. the buyer must first satisfy the terms of the 2007 VCRA Bill.

Rise refers to when a BB passes through a Hop-Up System and has a trajectory which increases above the bore path when the wind resistance meets the back-spinning BB pellet.

ROF is the number of BB pellets that may be discharged from a device within a specified time span.

RPM refers to Rounds Per Minute, or how many BBs may be projected from an airsoft gun per minute.

Round Per Second (RPS)

RPS refers to Round Per Second.

Scope is an optical sight which is used to acquire a target at lengthy ranges.

Semi Auto is when a round is launched with each squeeze of the trigger. The firing cycle re-cocks the firearm and feeds the next round into firing position, awaiting the next trigger squeeze.

Skirmish is a military battle or fight between troops and squads detached from the base-camps of opposite armies.

The Slide is the moving section on top of an automatic pistol. However, it can also be contained within a rifle device which reloads the gun.

The Smooth Bore walls in airsoft guns allow the BBs to retain a backspin when imparted by the Hop-Up. Airsoft gun bores do not have rifling groves cut into the inner walls of the barrel.

The remaining battery life of an airsoft gun is known as State of Charge.

Also known as Back Spin. As a result from contact with the Hop-Up nub, Back Spin is a BB pellet’s rearward rotation.

Springer refers to Spring-Powered Airsoft Guns, which are single-shot weapons that need to be cocked in between shots. Depending on the style of the gun, cocking may be in the form of a slide, bolt, or grip. These guns are generally less expensive; however, they do not fire automatically or semi-automatically.

The Stock is the end of the gun, which is generally held into the shoulder and can be extendable, full, or folding.

The path of a projectile or bullet.

The combination of green, gray, and tan to produce a digital pattern used in woodland or desert environments.

The ability of an airsoft gun to be modified or improved for optimal mechanical performance.

VCRA is the abbreviated word for the Violent Crimes Reduction Act.

Weaver Rail refers to the type of standardized accessory mounting system for firearms, like Rail Integration Systems but of a different size.