Here at AirsoftStation.com we have a large selection of airsoft guns of many different styles and types. If you are new to airsoft finding the product that is right for you can be a little disorienting. This page is intended to help guide you towards finding the airsoft gun which is best for you. If you can't find the answers you're looking for on this page please contact us here with your more specific questions.

Spring powered guns are cocked by hand and fire one shot at at time. They employ few moving parts which make them very durable and dependable. The downside is that they have a slow rate of fire so you have to make every shot count.  Spring powered airsoft guns are generally the least expensive, thus this is what most airsoft players start with.  Many high power airsoft sniper rifles are also spring powered. They are usually operated by a bolt action lever that simulatneously chargest the spring and loads the next BB.  These rifles often shoot as high as 450 FPS or higher using 0.20g BBs.  At those velocities, a heavier BBs is usually recommended to maintain accuracy.

AEG's (Auto Electric Guns) are battery powered and usually feature both semi and full auto functions. An electric motor turns gears in a gear box which in turn powers the firing mechanism. With a charged battery in full auto mode AEG's will pump out BBs for as long as you hold down the trigger. In semi-auto mode they will fire one shot for each time the trigger is pressed. No cocking required. Most airsoft rifles are AEG's. AEG generally refers to airsoft guns with a full metal gearbox. Low powered electric guns with plastic gears are usually referred to as LPEGS. 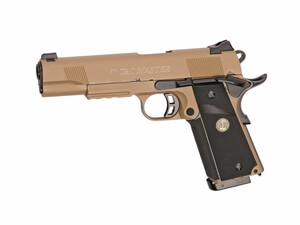 Green gas and CO2 is most popular for pistols but a there are also many gas and CO2 powered rifles on the market. Green gas is a form of compressed propane gas which is injected into the gun. When the trigger is pulled a burst of gas is released which propels each shot. Most green gas guns are semi auto only but a few come in a full/semi auto version as well. CO2 airsoft guns work the same way, but use cartridges of compressed CO2 instead.  Most higher-end gas pistols have a feature called "blowback."  Blowback airsoft guns have a slide that moves back and forth when the gun is fired, just like a real semi-automatic pistol.  The blowback action adds a small amount of recoil which increases the realism of these airsoft guns.

Airsoft - A type of air gun which fires 6mm Plastic BBs. Also referred to as "soft air" guns. Most airsoft guns are made to resemble real fire arms and are often used for training purposes. Airsoft games are held around the world and the sport is becoming more and more popular.

AEG - Auto Electric Gun. See above in "Types of Guns"

BBs - 6mm Plastic BBs are used as ammunition for airsoft guns. They come in several different grades which are separated by weight. 0.12g BBs weigh 0.12 grams each, 0.20g BBs weigh 0.20 grams each and so on. Heavier BBs are generally only used for more powerful guns.

Blow Back - A feature in many airsoft pistols which makes the slide shoot back whenever a shot is fired. This is to add realism making you feel the "kick" that you would feel if you were firing a real firearm.

High Capacity (AKA Hi Cap) Magazine - A type of magazine for airsoft guns which holds a large number of BBs. A small wheel at the bottom of the magazine is turned to force more BBs into the firing mechanism of the airsoft gun. This type of magazine allows the user to carry many round with very in just a few magazines. The drawback is that the magazine needs to be wound up every 30-70 shots.

CQB - Stands for "Close Quarters Battle" and is a type of fighting in which the combatants are fighting in very close range. In airsoft this term refers to airsoft guns which are meant for close quarters airsoft games. Typically these guns have a high rate of fire and are shorter to allow better maneuverability. Most CQB fields enfore a limit of around 350 FPS with 0.20g BBs, so if you plan on playing CQB this is an important factor to keep in mind.

Hop-Up - A feature in most airsoft guns which allows the user to adjust the backspin put on the BB as it exits the rifle. The backspin allows the BBs to fly straighter and farther.

FPS - Stands for "Feet Per Second" and is the velocity at which BBs exit the gun. The FPS refers to how powerful an airsoft gun is. The higher the FPS rating of a gun the more energy the BB has as it exits the barrel. To keep things simple, FPS is usually measured with a 0.20g BBs. This makes it easier to compare the FPS of different types of guns. Heavier BBs will lower the FPS but usually increase accuracy.

Pistol Grip - Any gun which is has a pistol style grip.

Pump-Action - Refers to a shotgun style airsoft gun in which the hand-grip is pumped back and forth in order to load the spring and ready the gun for firing. The gun needs to be pumped before each shot.

R.I.S. - Rail Integration System. Airsoft guns with R.I.S have a system of rails mounted on the front of the gun. These rails allow the airsoft gun to be customized with a variety of different accessories. These accessories include sights, scopes, lasers, grenade launchers, and special grips.

What is the right gun for you?

Personal preference should play a big role in making your decision. Since most guns are, for the most part, very similar internally, you should pick a gun which you think looks cool and fits the purpose for which you're buying it. There are many styles to choose from and most are available in several different levels of quality.

Beginners
Beginning airsofters should pay attention to both price and quality. If you're just getting started with airsoft it might not be a good idea to start by getting the most expensive guns. Some guns are quite expensive and if you find that airsoft is just not for you then you will probably end up being disappointed with your purchase.

However, you also don't want to just buy the cheapest thing you can find. Our less expensive guns can be fun toys but we recommend that you get a more solid gun which will shoot harder and give you a good experience without spending a fortune. For beginners we recommend our spring pistols made or our lower priced Electric Rifles. Also, get yourself a speedloader, they are cheap and will save you from the hassle of loading one BB at a time!

Intermediate Players
If you've played airsoft a few times, and maybe own a gun or two yourself you're probably starting to think of getting something a with a little more kick. You will want to look for features such as an FPS rating of 300 or higher and a high capacity magazine. You may also want to get a an extra magazine or two. As far as rifles go you will probably want an AEG and one that has a metal gear box. If you want a pistol we recommend our non blowback green gas pistols. They are relatively inexpensive and shoot hard!

Experienced Players
If you've been playing for a while you've had enough experience to know what type of gun you're looking for and what features you need. If you have trouble finding what you need on our site please contact us by clicking here.